Man who abused Myanmar maid gets longer jail term on prosecution's appeal; his wife convicted of not paying worker's salary

SINGAPORE - A former regional manager who assaulted his Myanmar maid - the second domestic worker he was convicted of abusing - had his jail term for the second set of charges raised from 24 months to 30 months on Monday (Aug 26) by the High Court.

The increase came after the prosecution appealed against the sentence imposed by a district judge in March on Tay Wee Kiat, 41, on two charges relating to Ms Moe Moe Than.

The charges are for kicking Ms Moe Moe Than while she was in a push-up position and for instructing her to slap his other domestic worker, before making both maids worship in front of a Buddhist altar at home, even though one is a Christian and the other a Muslim.

"Tay's ill-treatment of the victim took place over 11 months. He used implements such as a cane, a broomstick and a metal clothing hook. He caused both physical as well as psychological harm. He also humiliated and demeaned the victim," said the judge.

Read Also
Couple abused maid who was caned, given insufficient food and forced to eat own vomit 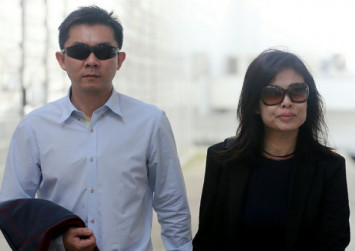 Chia was sentenced to three months' jail on this charge, which was ordered to run concurrently with her current jail term of 47 months for abusing the 28-year-old Myanmar national.

Justice Hoo said Chia's account that she had paid the maid the outstanding salary a day before the victim's repatriation, was "unbelievable".

Besides inflicting physical abuse on Ms Moe Moe Than, Chia had force-fed the maid a mixture of rice and sugar through a funnel. When the maid threw up as a result, Chia scolded her and told her to eat her own vomit.

She had also forced the maid to do her chores without a blouse on and threatened to kill her family if she told anyone about the ill-treatment.

Tay told the court on Monday that they will be defaulting on payment and will choose to serve jail terms in lieu of compensating the two maids.

Deputy Public Prosecutor Kumaresan Gohulabalan highlighted in court that it remains an option for the prosecution to seize the couple's assets if payment is not made.

Tay also asked the court to help facilitate monthly "tele-visits" between him and his wife.

The couple started serving their jail terms for abusing Ms Moe Moe Than on March 27 this year.

Justice Hoo asked the prosecution to check on this, but noted that it was ultimately up to the prison authorities to make the decision.

The couple were first convicted and sentenced in 2017 for abusing their Indonesian maid, Fitriyah, 34.

In March 2018, following an appeal by the prosecution, Tay's jail term for this set of charges was increased from 28 months to 43 months by a three-judge High Court panel. Chia's jail term remained at two months.

Among other things, Tay had forced Ms Fitriyah to stand on one leg on a stool while holding another stool above her head, with a plastic bottle shoved into her mouth.

He had also instructed the two maids to slap each other 10 times, and forced them to bow and get up in front of the altar 100 times, after blaming them for moving a piece of cloth on the table.

Chia was found guilty of slapping and punching Ms Fitriyah.

With the conclusion of the second case on Monday, the court will have to decide what is the appropriate date to start the couple's sentences for the first set of abuse charges.

It is also possible that the two terms may be ordered to run concurrently.