SINGAPORE - A mannequin standing on the ledge of a Housing Board flat in Clementi will get to stay for Christmas.

Mr Philip Sobrielo Gene put up the mannequin as part of Christmas decorations outside his mother's flat, but was told by Jurong-Clementi Town Council earlier this week to remove them due to safety concerns.

On Friday (Dec 14), however, he was told that he could keep them until the end of the year.

The mannequin was the centrepiece of the decorations he put up on the second-storey ledge of his mother's home, at Block 351 in Clementi Avenue 2.

Madam Sobrielo, 63, told The Straits Times: "This morning when I saw the town council staff coming, I thought they were going to ask us to remove (the display).

"I was so scared I prayed about it. Now, I can relax," said the retiree.

The town council said it initially had safety concerns after seeing the decorations placed on the ledge. However, Mr Philip was able to give a detailed explanation on how the display's pieces were secured. The mannequin, for example, was fastened to the railing of the parapet using twine and other materials.

"After hearing his explanation, we feel that (the decorations) will not pose a safety issue," said a spokesman for the town council.

Some residents have also asked the town council not to remove the decorations.

The spokesman added that since the theme of the decorations ties in with the coming festive season, the town council decided to make an exception. It also offered to work together with Mr Philip to "showcase (his) artistic displays in the many years to come".

Mr Philip, a dance instructor, has been putting up Christmas decorations every year since 1996. Even though he moved out of his parents' flat two years ago, he still continues with his annual tradition.

For his displays, he recycles decorations others have discarded. The mannequin for this year's display was supposed to be a Christmas angel, but he decided against adding wings because he was worried the rain would ruin them.

He said that the town council was "very nice and receptive", and initially offered to let him move his display to the ground floor. But he declined as he felt it could pose a hazard to children running around at a nearby playground. He was also worried that the decorations might get vandalised or stolen.

Eventually, the town council allowed him to keep the display on the ledge until the end of the year.

Mr Philip said he understood that the town council had "just been doing its job" when it initially asked for the decorations to be removed. While he was heartened by the positive comments online about his decorations, he accepted that not everyone felt the same way.

The town council had looked into the matter after citizen journalism website Stomp contacted it. Ms Augusta Loh, who lives in Clementi but not in the same block, wrote to Stomp to raise safety concerns over the decorations.

When told about the town council's latest decision, Ms Loh, who is in her 40s and works in facilities management, said she was worried that other residents might start putting items on HDB ledges. 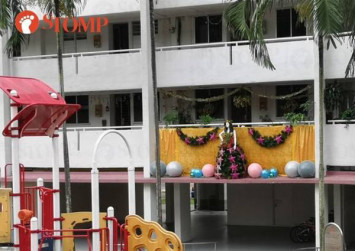 Caregiver Shirley Cornelius, 40, said she understood Ms Loh's concerns about safety. "But there's been heavy rain and strong winds and the decorations have withstood all this harsh weather. This should show that (Mr Philip) secured them well," she said.

Housewife Sng Siew Lan, 62, said she felt the display should remain, adding that passers-by would often visit the estate to take photos.

On why he takes the effort to put up elaborate displays year after year, Mr Philip said: "Not every family can afford Christmas decorations, I'm just doing what I can to let people enjoy it."