SINGAPORE - A National University of Singapore (NUS) professor caught on video speeding in a Maserati along Lorong Chuan was given the maximum fine of $5,000 after admitting to dangerous driving in court on Monday (Nov 26).

Yeung had been arrested five days after committing the offence on Sept 7.

On Sept 11, a video was posted on the Beh Chia Lor - Singapore Road Facebook page which showed a black Maserati speeding towards a truck. 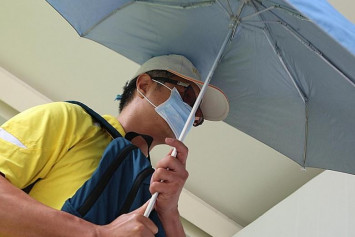 It then swerved abruptly to the right and scraped the road divider, narrowly missing the traffic light pole.

The car then went against traffic on the other side of the road, where it almost crashed head-first into an oncoming taxi and a car.

The video showed the Maserati swerving back to the correct lane after the near miss, before overtaking the lorry and stopping in front of it. In doing that, the Maserati driver prevented the vehicle from moving forward.

Henry Yeung Wai Chung leaving the State Courts after being charged yesterday. The 50-year-old, who is acting head of the Department of Geography at NUS, was allegedly driving the Maserati which was seen going against traffic and narrowly missed crash

Police said no injuries were reported in the incident but they urged all motorists to drive safely, and to strictly abide by traffic rules and regulations.

"The Traffic Police will not hesitate to take firm action against motorists who choose to endanger the safety of other road users," they added.

According to the NUS website, Yeung was an assistant professor at the university from 1998 to 1999 before a promotion earlier this year.

In his brief biography on the website, he stated: "Since February 2018, I have been appointed Distinguished Professor of the National University of Singapore in recognition of my 'outstanding academic excellence as well as academic and intellectual leadership'."

Soon after the driver of the Maserati was revealed to be Yeung, NUS confirmed that it was aware of the incident.