'Maybe he watched too much TV': Father says of son, 7, who climbed out 11th storey window

If you've ever wondered why your kid has suddenly gone quiet – perhaps a bit too quiet – it's probably best to check in on them.

A couple was shocked when their neighbour approached them with news: their seven-year-old child was spotted climbing out of the window of their 11th storey unit in a viral video.

The video showed the child climbing onto the ledge outside the toilet window and spraying water over the edge.

Though the incident occurred on Feb 5, the video only started circulating later, before it was shared into the residential group chat which neighbours used to contact the child's parents.

Speaking with Shin Min Daily News, the father, who declined to be named, admitted that the window was not closed that day, but has since been locked.

Read Also
Mum checks on daughters because they were quiet, finds them eating a cockroach 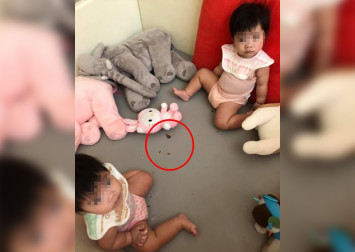 "On the day of the incident, I fetched my children home from school before heading out to work. Everything was as usual," he said.

While his eldest son and daughter were revising school work in their room, the youngest played by himself.

As the youngest had never displayed any tendency to climb, his sudden actions took his parents by surprise.

"I asked my son if he did that because he was curious. Maybe he watched too much TV and thought he could fly too," the father told the Chinese daily news. "I will restrict the videos he watches online now"

He also explained the dangers of such actions and possible consequences to his son, using a torn strip of paper as an analogy for how certain damages can't be undone.