Mediacorp, creative agency apologise for 'brownface' E-Pay ad, then seem to defend it

[UPDATE July 30, 4.20pm]: Police is investigating the rap video by local comedian Prettipls and her brother Subhas for alleged offensive content after a report was lodged. She has since taken the video down.

E-Pay just learned the hard way that their tagline, "All also can", does not apply when casting a Chinese actor to play characters of different races.

The government's e-payment initiative drew backlash on social media after a recent campaign featured Mediacorp artiste Dennis Chew dressing up as four characters, including a Malay woman and an Indian man.

E-Pay is an initiative that aims to roll out e-payments in coffee shops, hawker centres and industrial canteens. It encourages people to tap or scan to pay for their food for a convenient and hassle-free meal.

Chew, who is known for his comedic Auntie Lucy character, appeared as a young Chinese woman with pink dip-dyed tresses and a moustached Chinese man in a blue jumpsuit in the advertisement. 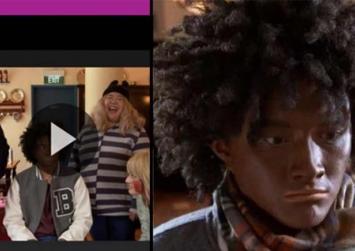 Sounds good so far? Here's where it all went wrong.

The ad also featured Chew donning a headscarf to play a Malay woman. He also appeared as an Indian man wearing a name tag that read "K. Muthusamy", complete with a darker skin tone.

The alter egos were featured on E-Pay's website, on vouchers, and on banners at hawker centres.

On July 26, Ruby Thiagarajan, editor-in-chief of Mynah Magazine, tweeted screengrabs of the offending advertisement with the caption: "Brownface in a Singaporean ad in 2019. I thought we already went over this…"

Netizens took issue with the fact that E-Pay did not hire actors that were representative of the characters' races.

Facebook user Faris Joraimi also spoke out against racial caricatures, saying, "Does CMIO [Chinese, Malay, Indian, and Others] mean anything at all if it's actually one Chinese guy playing caricatures? Malay women are not archetypes or characters for you to assume for comic effect… And you just don't apply brownface to play Indian characters la this is such a basic rule…"

All images of the characters have since been scrubbed from E-Pay's website. The only character that remains is the Chinese man in a blue jumpsuit.

On July 28, Havas, the creative agency behind the campaign, and The Celebrity Agency, Mediacorp's celebrity management arm, released a joint statement on the advertisement to The Sunday Times.

They apologised, saying, "We're sorry for any hurt that was unintentionally caused. Behind the ad is an initiative to provide greater convenience to consumers, merchants and small food businesses."

However, the statement also appeared to defend their choice to have Chew play characters of a different race: "The message behind this advertising campaign is that e-payment is for everyone.

"For that reason, Dennis Chew, well-known for his ability to portray multiple characters in a single production in a light-hearted way, was selected as the face of the campaign. He appears as characters from different walks of life in Singapore, bringing home the point that everyone can e-pay."

Thiagarajan, who had initially called out E-Pay on Twitter, was not impressed by the apology, saying, "I don't get the sense that they understand what they're apologising for though. This is them justifying what they did + 'sorry for unintentionally hurting you'. No mention of brownface or why it's wrong!"

Why 'brownface' is wrong

The terms 'brownface' and 'blackface' mean so much more than someone simply darkening their skin to impersonate a person of a different race.

In the US, 'blackface' has over 200 years of history and was used as a way to spread racist stereotypes. White performers would put on 'blackface' and act out caricatures portraying African-Americans as lazy or foolish.

While Singapore does not share the same history, 'blackface', 'brownface' and racial caricatures have been used in the past to show characters in unflattering light.

In 2017, Mediacorp was fined $5,500 by the Infocomm Media Development Authority (IMDA) for a 'blackface' bit in the web series I Want To Be A Star.

The web series had a scene where a Chinese actor — wearing an afro wig and black face paint — bumps into and scares a woman.

A common defence of 'blackface' or 'brownface' is that it is a joke or that it's not meant to be racist. Or as Mediacorp and Havas framed it, any hurt resulting from the 'brownface' was "unintentionally caused".

However, David Leonard, chair of Washington State University's department of critical culture, gender, and race studies, feels that that is no excuse.

Leonard told Vox in 2014: "In many ways, one's intent is irrelevant... The harm, whether it's harm in terms of eliciting anger, or sadness, or triggering various emotions… is there."

To put it simply, regardless of intent, 'brownface' or 'blackface' can cause offence that is very much real.

Perhaps the best thing to come out of this whole saga is a satirical song by local comedians Prettipls and Subhas titled K. Muthusamy, referencing the Indian character in the maligned E-Pay advertisement.

Preeti calls out E-Pay in her rap, asking them: "Is it the app or the stereotypes you tryna promote?"

Subhas also takes aim at companies that use 'brownface' in their campaigns saying, "Brownface, brownface, everybody wanna be our race. The new marketing strategy is outrage."

It seems that some racial sensitivity lessons are in order for all the companies involved.

#racial discrimination #Social media #In Case You Missed It