Despite constant reminders to abide by safety distancing rules during the Covid-19 pandemic, many still continue to gather in public spaces.

Over 500 domestic helpers were spotted gathering at Toa Payoh Town Park on Sunday (Aug 16), reported Shin Min Daily News. While most of them stayed within small groups of five or less, a few of the women were spotted mingling between groups.

A group of 12 was also spotted resting in the area outside Oasis Taiwan Porridge, an eatery located within the park. 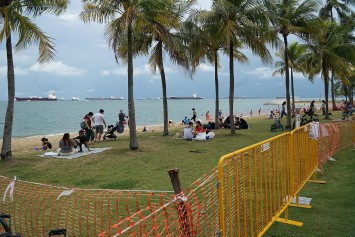 Speaking to the Chinese daily, a chef expressed worry over the increasing number of people gathering outside the eatery in the past two weeks.

His colleagues echoed his concerns, saying that should there be an infection due to the gatherings at the park, the facility would have to temporarily close down, which would affect their business.

One of the domestic workers, who was celebrating her birthday with her friends that day, told the paper that she understood the regulations, hence they decided to sit in separate groups of three and four. Despite that, she was still told by members of the public to move away three times.

"I don't know why we were targeted," she shared.

A member of the public said she was told by the police that as long as the groups were seated a metre apart, it was not considered a problem. While she wasn't angry, the woman said she felt rather disappointed.

In response to Shin Min Daily New's queries, the Centre for Domestic Employees (CDE) said Toa Payoh Town Park had long been a gathering place for domestic workers, even before the pandemic struck. 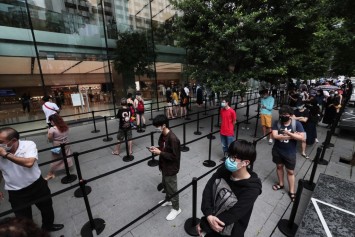 CDE's chairman, Yeo Guat Kwang, also asked members of the public to empathise with them.

"We hope the public can understand, our domestic helpers need a break after a week of hard work. The CDE has been advising them and updating of the regulations in place during phase two."

Sophianne Araib, the group director of Parks at the National Parks Board(NParks), told AsiaOne on Tuesday that "most of the park visitors have been observing safe distancing measures and are also cooperative when reminded to do so."

Safe distancing ambassadors and enforcement officers have also been assisting NParks staff to ensure safe distancing within the area.

During their patrols, NParks staff "will advise park visitors on safe distancing requirements such as keeping to groups of no more than five people, no intermixing between groups, and maintaining at least one metre apart between them."

Several groups of more than 10 were observed congregating at these places. When approached by safe distancing ambassadors and enforcement officers, they behaved aggressively.

He said: "I have been concerned that some complacency may be setting in, at a time when we must keep our guard up."