Actress Michelle Chong, playing a persona named Ah Lian, highlights how 995 calls should not be misused for non-emergency situations.

SINGAPORE - This Ah Lian may not be pedalling stuff on a live-stream, but the cause she sells is an important one.

In a 30-second video by the Singapore Civil Defence Force (SCDF), actress Michelle Chong, playing a persona named Ah Lian, highlights how 995 calls should not be misused for non-emergency situations.

This is Ah Lian. She has a toothache and calls 995. Don’t be like Ah Lian. #995ForEmergenciesOnly

In it, Ah Lian makes an emergency call to 995 for a toothache, and the officer on the line, also played by Chong, reminds her that those with non-emergency cases should go to the nearest clinic or call 1777 instead. 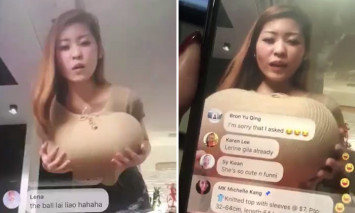 In 2016, SCDF handled close to 180,000 emergency calls, of which almost 19,000 were false alarms and for non-urgent ailments such as constipation and chronic cough.

In July this year, SCDF said it would be using an artificial intelligence speech recognition system to transcribe and log calls to make the process more efficient. However, details of when the system will be implemented have yet to be announced.

Chong has also appeared in advertisements for the Singapore Tourism Board, Netflix and Pizza Hut. Last year, her Ah Lian character also featured in promotional trailers for Netflix series Orange Is The New Black.

The Straits Times has contacted SCDF and Chong's management agency for more details.