They had just moved into a room that they'd rented for $1,000 a month. But within 10 minutes of signing the lease, the pair were chased out by the landlord.

The issue that triggered the dispute? One of the men had asked the landlord why his phone number had "so many 3s" in it, Shin Min Daily News reported.

The incident happened at a landed property along Poh Huat Road, where the two men, both Chinese nationals, had intended to share one of the rooms available for rent.

According to the pair who work in a warehouse in Singapore, they had intended to split the $1,000 monthly rent between them. They decided to seal the deal after viewing the property, even though they noticed that the condition of the room differed slightly from what was shown to them in photos.

They then transferred $500 to the landlord as deposit.

One of the men, surnamed Yuan, told Shin Min Daily News that they were only due to sign the lease on the day that they moved in, which was on March 16. There, they transferred $1,500 to the landlord, which included a further $500 deposit as well as the first month's rent.

However, when it came to exchanging their contact numbers, his roommate asked the landlord, "why does your number have so many 3s in it". This appeared to anger the man, who scolded them.

Said the roommate, surnamed Li according to the Chinese-language paper: "The landlord retorted that my number has so many 8s, and that I'll never be rich in my life."

He added that the landlord had raised his hand as he said this and it looked like the landlord was about to hit him, but Yuan intervened.

The men said the landlord started spewing vulgarities and chased them out of the house. They were refunded the $1,500 that was transferred on the day, but not the initial $500 deposit.

The pair decided to make a police report. Said Yuan: "We were only in the house for 10 minutes before we were chased out, and now we have to find alternative accommodation."

According to the terms of the lease, tenants had to be respectful to the owner, Yuan added. "We called him landlord, but he was not happy, insisting we refer to him as the homeowner, or boss, or big brother."

Yuan described how the landlord's attitude was brusque on the day that they were to move in, which was a far cry from when they came to view the room.

According to Shin Min Daily News, the owner of the home could not be contacted for an interview. 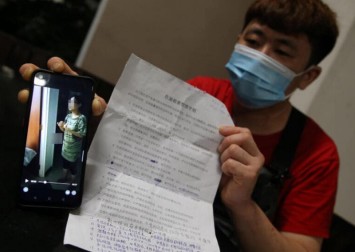 The pair suspect that the strict rules of the rental agreement are part of the landlord's ruse to earn from deposits made by potential tenants.

Shin Min Daily News reported that the terms of the agreement include having to close the doors softly, with tenants not allowed to make loud noises. In addition to ensuring the room's cleanliness, they were also required to clean the living room and the area under the staircase every third and eighth day of the month.

The agreement stated that the tenancy agreement can be revoked with no deposit refunded if tenants break the rules more than once.

The two men added that after the agreement was signed, the landlord also threatened that "if I tell you to get out, you have to get out within three days".

A check with the police confirmed that officers were alerted to the dispute on March 16, 12.55pm. They added that "the parties involved were advised on their legal recourse", and that "no further police assistance was required".