'Minor issue': ZoukOut marred with heavy rain and floorboards that sank at part of VIP tent

Pictures sent to The Straits Times showed the floorboard cave-in (right) in one area of the VIP tent.

SINGAPORE - Heavy rain and floorboards that sank in part of the VIP tent marred the fun on the second night of dance music festival ZoukOut, which returned to Sentosa’s Siloso Beach after a three-year hiatus.

On Sunday at around 2am, the sinking of the floorboards prompted the police and staff to move patrons to the beach.

According to eyewitnesses, the incident happened during the headlining set by Dutch DJ Armin van Buuren.

Pictures sent to The Straits Times showed the floorboard cave-in in one area of the VIP tent. The area, with sofas, tables, cups and bottles, was cordoned off.

“Quite a number of guests had to be moved to the sand,” said an eyewitness in the VIP tent who preferred to remain anonymous. “If it had happened in the area I was in, I would’ve been concerned for the safety of everyone.”

A spokesman for Zouk said it was a “minor issue”, noting that there were no injuries.

Read Also
'It's been 3 long years': ZoukOut returns with a bang at Sentosa 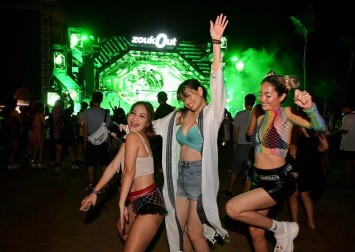 “The VIP tent at ZoukOut did not collapse. There was a minor issue with the floor boarding which affected the experience of the attendees in that specific area, and in the interest of providing the best experience possible, we relocated the people impacted.

“There were no injuries and the event continued without incident or interruption.”

In response to ST queries, the police said they responded to a call at around 2.20am on Sunday.

When the officers arrived, they “established that there was an issue with a part of the platform” in a tent. “Police officers... assisted the organiser of the event to direct those affected away from the area as a precaution. No injuries were reported,” they said.

Another VIP tent attendee, whose table was about four tables away from the middle of the tent where the incident occurred, said a lot of VIPs were left stranded outside the tent and not allowed back in.

“They had no drinks, tables or chairs until after about one to 1½ hours, when the staff started moving the tables and sofas to the beach (outside the tent),” said the 28-year-old information technology account manager. “I think if the incident was ‘minor’, they could have handled the situation better.”

The second night of ZoukOut that kicked off at 6pm on Saturday was also hit by heavy rain. The organisers flashed an advisory on the main stage screen at around 5am that read: “Weather evacuation. Please calmly head to either exit.”

The proceedings had been expected to last until 7am.

The 19th edition of ZoukOut was a two-night affair, kicking off on Friday. It was last organised as a one-day event in 2018.

The organisers, nightclub Zouk and event promoter AEG Presents, earlier said they were expecting up to 30,000 attendees over the two nights.

The first night featured popular names like Dutch DJ Tiesto and Singaporean acts such as Wukong.

On Saturday, Tiesto, who has seven million followers on Instagram, posted a video showing part of the stage going up in flames and the prompt response by a staff member with a fire extinguisher. His caption said: “Played so many heaters last night that the stage caught fire.”