(Right) A photo of Madam Puah Geok Tin and her son Louis Pang posted by Mr Pang on Instagram. (Left) He confirmed his mother's death on social media yesterday.

The search for missing Singaporean kayaker Tan Eng Soon has been refocused on the waters off Pahang and Terengganu after his kayaking partner Puah Geok Tin's death was confirmed by her son early yesterday morning.

On Wednesday, Madam Puah's body was found floating five nautical miles east of Kuala Kemaman in Terengganu state by fishermen - some 185km from where she and Mr Tan were reported missing last Thursday.

Madam Puah, 57, and Mr Tan, 62, were kayaking around the Endau islands near Mersing, Johor, with 13 others when they drifted away from the group amid rough conditions.

Their green double kayak and personal belongings were found near Tanjung Gelang, which is close to Kuantan Port in Pahang and about 30km south of Kemaman, on Tuesday. 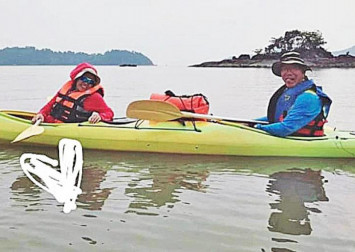 The youngest of three children, he wrote: "Dear Mummy, you've led a wonderful and glorious life. You did what you love to do till the very end...

"Now spread your wings, and be free. I promise to bring you back home safe with me."

Mr Pang, who had been keeping vigil with his father, Mr Peng Mun Kit, 56, was the only one to enter the hospital morgue, Chinese-language newspaper Shin Min Daily News reported.

According to Shin Min, he cried out , "Mummy, don't leave me", after seeing the body, and when he left the morgue, he was in tears as he sat on the ground and stared blankly at the floor.

Chinese evening daily Lianhe Wanbao reported that Mr Pang and other family members returned to the morgue yesterday morning to collect Madam Puah's remains, but Malaysian authorities had to conduct an autopsy. 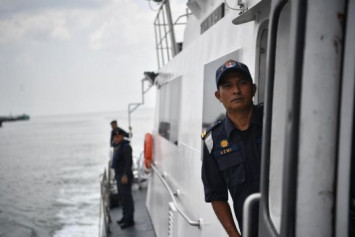 Mr Pang told Wanbao that he hoped to take his mother back to Singapore as soon as possible.

One of the fishermen who found the body told Shin Min that he spotted a life jacket floating in the distance as he was heading back to shore, and he was surprised by what he found.

The other fisherman called the police, and he told Wanbao the body was swollen and had several wounds.

Meanwhile, it is believed that Mr Tan's family are still stationed at Penyabong Jetty in Endau, Johor, as search and rescue (SAR) operations enter the eighth day today.

In a statement yesterday, the Malaysian Maritime Enforcement Agency (MMEA) said 32 people, one ship and two boats have been deployed to search a 500 square nautical mile area.

A notice has been issued to residents around Kuala Kemaman to provide information if any discovery is made.

"Residents and fishermen are also assisting in the search around the islands and waters of Kemaman and Kuantan up to Kerteh, Terengganu," MMEA said.

MMEA Mersing Zone chief Haris Fadzillah Abdullah told the press that air assets were no longer needed and a second SAR base, like the one at Penyabong Jetty, will be set up in Kemaman.

An MMEA boat would continue to comb Endau waters, he said, while a search was also being done along the coastline stretching from Kuala Kemaman to Paka, Terengganu.