The Straits Times understands that the kayak was found on the Kuantan coastline, which is more than 200km from Mersing, Johor, where the pair had set off from with a group of 13 other kayakers from Singapore taking advantage of the long weekend.

Mr Tan’s bag, with his handphone and PAssion card, was found in the kayak that had washed ashore. The family was alerted to the discovery when the fisherman used Mr Tan’s phone to contact them via WhatsApp.

They then informed the Malaysia Maritime Enforcement Agency (MMEA), which has been carrying out search and rescue efforts since last Friday.

It is understood that the MMEA is reaching out to the fisherman to assist in the search and rescue efforts. 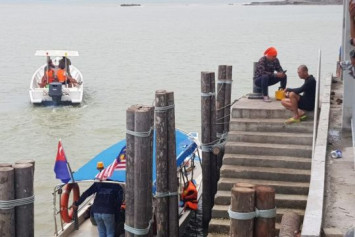 The Malaysian authorities said on Monday (Aug 12) that more aircraft have been deployed, covering 900 square nautical miles between the east and north of Pulau Tioman in Pahang. This is about 3,000 sq km, or four times the size of Singapore.

The operation on Sunday had covered 500 square nautical miles in the same area and involved only one aircraft. Relatives of the two missing kayakers are in Mersing assisting with search efforts.

The two were separated from the group in the Endau waters off Mersing during rough conditions which saw strong winds and choppy waters lashing at their kayak.

Madam Puah, a businesswoman, and Mr Tan, a retired lawyer, knew each other before the trip and are said to have had some experience in kayaks in open waters.