A posed picture of a person using a phone to take upskirt photos.

SINGAPORE - A National University of Singapore (NUS) student, charged earlier over filming a schoolmate showering on campus, is facing more charges for similar offences carried out at an MRT station and in an office.

Joel Rasis Ismail, 26, had been charged in May with one count each of criminal trespass and insulting the modesty of the 23-year-old woman.

He is accused of using his mobile phone to record a video of her showering in a woman's toilet, on the sixth level of the NUS Kuok Foundation House, around 6.30am on May 11.

On Wednesday (Dec 18), Joel, a Singaporean, faced nine more charges of insulting the modesty of several women as well as criminal trespassing, with three of the offences allegedly committed in 2016.

This includes one count of taking two upskirt videos of a woman on June 2, 2016, while they were in the office of architecture firm MKPL Architect in Cecil Street.

He also allegedly took upskirt videos of unknown women who were going up the escalator at Tanjong Pagar MRT station on two occasions in 2016: on May 24 and June 6.

In addition, Joel allegedly took three more videos of an unknown woman while she was in the shower of a woman's toilet on the third level of the NUS Kuok Foundation House some time in March this year.

According to past reports by The Straits Times, he was allegedly caught on camera filming the student in the campus toilet, after NUS enhanced security on its campuses following the Monica Baey-Nicholas Lim saga that captured the nation's attention in April this year.

Ms Baey had criticised the punishment given to Mr Lim for taking a video of her showering on campus, saying the university was not doing enough to punish Mr Lim, a fellow undergraduate. 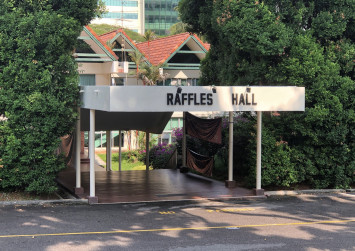 In a statement on Wednesday, an NUS spokesman said Joel has been suspended for three semesters after an internal board of discipline was convened in June. He must also attend counselling and rehabilitation sessions.

These disciplinary sanctions will be part of his formal educational record at NUS, the spokesman added.

"The student may resume his studies only after he is certified fit for return to campus by relevant professionals after the suspension," said the spokesman.

NUS may also convene additional disciplinary proceedings against Joel if new information is disclosed in court proceedings that were not the subject matter of the previous hearing, he added.