In a Facebook post, Mr Heng said he received many good ideas from 30 social service organisations during a virtual meeting on Saturday, ahead of his ministerial statement on the fourth round of Covid-19 support measures on Tuesday.

"Their passion to serve came through during the dialogue, as they are doing all they can to strengthen support for vulnerable members of our community during the circuit breaker," said Mr Heng, who is also Finance Minister.

He said the discussion touched on how social service agencies can strengthen collaboration and capability building, and difficulties with fundraising during the pandemic.

"The circuit breaker has accelerated the shift to digital, as more services are provided online. This highlighted both the potential and also the current constraints of going digital," said Mr Heng.

In addition to looking at providing better support as part of the upcoming Budget, the Government will work with the sector to "embrace digitalisation, accelerate transformation and scale up new capabilities", he added.

Minister for Social and Family Development Desmond Lee, Minister for Community, Culture and Youth Grace Fu and Minister in the Prime Minister's Office Indranee Rajah joined him in the call.

Mr Heng said he was heartened to see the sector working together, with new areas to collaborate identified during the discussions.

"We are making good progress towards building a more caring and inclusive society. We will build an even better tomorrow, with the strong support of social service agencies," he said.

I was very happy to e-meet many familiar faces from the social service sector on Saturday, together with Desmond Lee,...

The Government earlier announced a total of $63.7 billion in aid under three Covid-19 support packages, which were rolled out between February and April.

Measures included the Jobs Support Scheme, which subsidises wages for local workers, and direct cash transfers such as the $600 Solidarity Payment. 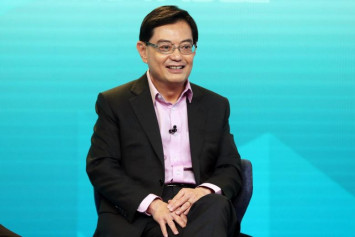 The first Unity Budget delivered on Feb 18 saw $6.4 billion set aside to support businesses, workers and families affected by the coronavirus.

On March 26, Mr Heng added $48.4 billion to the effort in a supplementary Resilience Budget.

On April 6, he announced a further $5.1 billion under the Solidarity Budget to enhance and extend several support measures.

Another $3.8 billion was announced this month to extend some of the support measures for another four weeks of the circuit breaker.

President Halimah Yacob has already given her assent for about $21 billion to be drawn from the reserves to fund these packages.