It's not only the public who are demanding for justice to be served.

Mary Baey, the mother of National University of Singapore (NUS) undergraduate Monica, has spoken up about her daughter's plight in a Facebook comment made on Saturday (April 20).

Monica, a third-year communications undergraduate, took to Instagram Stories last Friday (April 19) to recount her harrowing experience with a hidden camera in the shower on Nov 25 last year.

She shared about how she noticed an iPhone held underneath the cubicle stall after she finished her shower in the hall.

After investigations were concluded, police gave the perpetrator a 12-month conditional warning while NUS asked him to write an apology letter and undergo mandatory counselling, in addition to being suspended for a semester. In her Facebook comment, Baey echoed her daughter's unhappiness towards NUS for the sanctions they imposed, calling it "completely unacceptable".

She also criticised the 12-month conditional warning meted out by the police as "completely ridiculous". 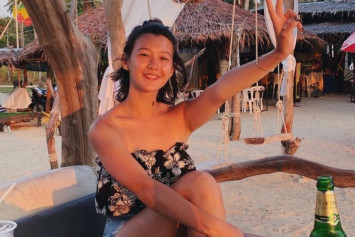 She exclaimed: "How can we know this is not going to happen again and how can there be no serious consequences for such (an) action?"

Baey went on to suggest that the act was premeditated based on the CCTV footage as the perpetrator was "seen going from toilet to toilet to look for his victim".

"This is a person who knows what he is doing, and the actual video is found on his handphone," she said.

She also called the university out for letting the perpetrator off lightly with "an absurd and pathetic apology and a suspension of a semester".

"He will be back to NUS as per normal with no consequences… This is completely unacceptable," she added.

As such, she expressed that her trust in the school has been "broken" as they are supposed to provide a "safe and secure place" for students and to "protect them from such incidents".

"How can we place our trust in NUS, a national and international institution? The trust is now broken," she stated.

Baey also claimed that the sanctions show that her daughter "did not have the support from the Singapore Police or NUS" and praised her for going public on social media.

She also reiterated her stance for harsher penalties and asked for NUS to take stronger action and have clearer campus policies that will "protect female students against such sexual harassment".

"Mom and Dad will be there to support you and you have been courageous in speaking out on this matter," she concluded.