In a bid to evade the Traffic Police after failing to comply with instructions to pull over, a 21-year-old motorcyclist and his 18-year-old pillion rider rode against the flow of traffic, disregarding red light signals and committing several other traffic violations, the police said in a news release yesterday (May 28).

The two were later arrested.

The chase on Wednesday (May 27), which started along Tampines Expressway (TPE), spanned over 5km with the motorcyclist eventually leading the Traffic Police officer into weaving dangerously between the pillars of an HDB block void deck in Ang Mo Kio Avenue 5.

The pursuing officer lost sight of the duo after he was believed to have crashed into a pillar.

Posted by Singapore roads accident.com新加坡公路意外网页 on Wednesday, May 27, 2020

After the duo's identities were established via CCTV footages, a manhunt was launched and they were apprehended within 11 hours.

The motorcyclist alone was arrested for dangerous riding, driving without a valid licence and other charges, while both parties are being investigated for perverting the course of justice and breaching Covid-19 safe distancing measures.

Their vehicle has also been seized by the police.

Read Also
Banned driver speeds off after seen using phone in van, gets into accident with lorry, found with 'illegal' passenger 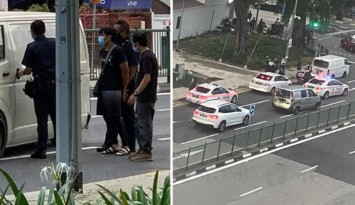 In their news release, the traffic police declared a stern view on persons riding or driving a vehicle without a valid licence, citing that dangerous road behaviour would put the lives of other road users at risk.

"We will continue to take tough enforcement action against errant motorists who choose to flout traffic rules or to disregard the safety of other road users, including pedestrians and other vulnerable road users."

If convicted, motorists could face a fine of up to $5,000 or 12 months of jail for dangerous riding or both. Subsequent convictions would mean a heftier fine of up to $10,000 or to two years in jail, or both.

Their licence may also be disqualified by the courts.

For obstructing, preventing, perverting or defeating the course of justice, those convicted would be liable to imprisonment for a term not exceeding seven years or a fine, or both.