SINGAPORE - A video of a young girl being slapped in public sparked outrage earlier this month, and the Ministry of Social and Family Development (MSF) said it has since acted to ensure the child's safety.

"MSF has taken the appropriate steps to ensure the safety of the child," said a ministry spokesman on Monday (Nov 19). "The case has also been referred to a child protection specialist centre to ensure the child's well-being."

The video was taken on Nov 5 and MSF had said to The New Paper on Nov 8 that the ministry and the police were investigating the incident.

In the clip, the girl, who looks to be of primary school age, is seen kneeling next to a white car at the Ikea Tampines carpark.

A man, believed to be her father and standing next to a woman, points a finger at the girl before slapping her. The impact causes her to almost lose her balance. 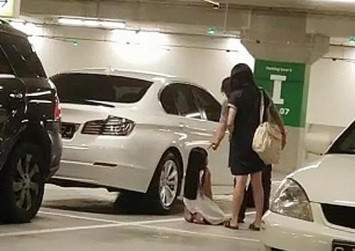 The girl remains kneeling as the man walks away, and he turns back to scold her before the clip ends.

The video was sent to citizen journalism website Stomp and was filmed by a passer-by who wanted to remain anonymous.

The Stomp contributor said the woman seemed too scared to hold the man off, adding that he stopped the recording after suspecting he was noticed by the man.

The video caused plenty of reaction online, with at least one netizen reporting the incident to MSF.

MSF figures online show that it investigated 894 cases of child abuse last year, of which 373 were for physical abuse.