A young child's fun at the seaside came to an abrupt end when a jellyfish stung her leg last Friday (July 17).

The four-year-old girl had been paddling in the shallow waters near FOC Singapore, over at the east end of Palawan Beach, Sentosa, her mother Carolyn David shared in a cautionary Facebook post.

She wrote: "Please take precautions on the weekend with your children around Sentosa waters." 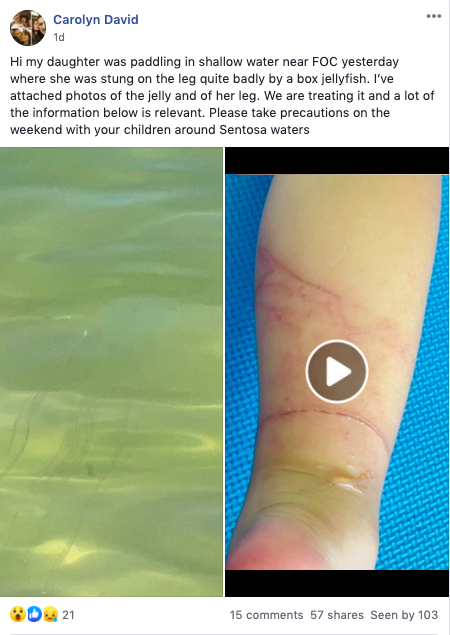 An attached video showed the extent of the girl's injuries. Her calf was marred with angry red welts and blisters.

Fortunately, her mother managed to administer first aid by applying vinegar on her leg and giving her antihistamines to help with the itch and pain.

The girl has since been given antibiotics and medicated cream to apply on the wounds while ensuring her blisters do not get infected.

Meanwhile, the Sentosa Development Corporation (SDC) has put up signs warning of jellyfish sightings. A research team from the National University of Singapore has also been dispatched to study the jellyfish.

Speaking with 8world, the SDC said there will be additional officers patrolling the beach. They've also advised the public to remain vigilant while swimming in the sea.

This isn't the first time a jellyfish has been sighted in Singapore. In fact, there have been several sightings of box jellyfish in the past months.

Box jellyfish venom is considered to be among the deadliest in the world. Their stings can cause excruciating pain and can even cause humans to go into shock or die, according to National Geographic.

In March, a woman was stung by one off the coast of East Coast Park, near the National Sailing Centre.

Jade Dyson, 28, described the pain as "absolutely excruciating and completely debilitating". The sting left her unable to move as her back muscles "froze" and "spasmed out of control".

In a comment on David's post, Dyson shared that the extent of her stings could have been fatal for a child.

Screenshot from our video - of the sighting on 3 July

More box jellyfish of varying sizes were spotted in the waters around Singapore, including areas such as One Degree 15 Marina at Sentosa, Tuas, Seringat and Lazarus island.

Marine Stewards have also updated their advisory, asking the public not to swim at Sentosa, Seringat, Lazarus and St John's islands for the next two weeks.

What to do after you've been stung

In the event of a jellyfish sting, one should avoid rubbing the wound or attempting to remove the tentacles by hand.

According to local marina conversation group, Marine Stewards, one should call for an ambulance immediately, rinse the affected area with white vinegar and, if possible, use tweezers to remove the tentacles.