'My friend got BBQ-ed by fairy lights': Woman thanks Crocs for saving friend's life after electric injury

Safety hazards are everywhere and accidents can happen when you least expect them to.

One woman got the shock of her life, quite literally, when she got electrocuted while putting up decorations for a pre-school concert.

Thankfully, the teacher walked away from the incident relatively unscathed.

The incident was shared on Saturday (Dec 3) in a video by TikTok user Natalie, who is the woman's friend.

Images showed a stage backdrop adorned with balloons and fairy lights and a woman being tended to by paramedics from the Singapore Civil Defence Force as well as a close-up shot of the injuries she suffered to her hands.

"My friend got 'BBQ-ed' (electrocuted) by fairy lights, fell off from the ladder and blacked out. Luckily she was wearing Crocs, aka insulators of electricity!" Natalie posted.

Natalie told AsiaOne that her friend was hanging up some balloons for a graduation concert at the school when the accident happened.

Speaking through Natalie, the 27-year-old pre-school teacher, who wanted to be known as Gladys, shared: "It happened most likely because the fairy lights were powered by a wall plug and some wires were exposed."

She added that the balloons had been secured to a "thin metal rod" by paper clips.

"I was hanging the balloons on and didn't even realise I fell from the ladder until I regain consciousness a few seconds after," said Gladys.

Read Also
'Bullied' over $8 sticker? Woman says she was confronted by printing company over 1-star review 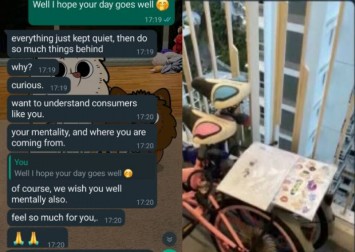 After paramedics were called in, she was wheeled into an ambulance and taken to the A&E, where she remained for seven hours.

Gladys counts herself lucky that her injuries weren't serious.

"I was lucky as I only suffered a small superficial burn wound together with some grazes from the metal rod since I pulled it down with me. No exit wound as well," she shared.

She was discharged the same day "as everything seemed okay".

In the captions to the TikTok clip, Natalie, who's also a pre-school teacher, shared how it was lucky that her friend had been wearing her Crocs rubber sandals that day.

One commenter pointed out though, that any rubber-soled sandals and shoes would have the same effect.

Another wrote that the most important rule for electrical safety "is to make sure power supply is off and grounded".

Natalie told AsiaOne that it was a good thing that her friend had been persuaded to wear her indoor slip-ons that day.

"She didn't want to wear them initially but her colleagues asked her to. Else she's gone by now," said Natalie.

Besides "leakage" of electricity from the exposed wires, Natalie added that paramedics from SCDF shared how "there was also static [electricity] from the balloon as well, which caused her to be electrocuted".

From their sharing, Gladys and Natalie hoped that the post will be able to drive more understanding toward pre-school teachers and how the job is "not just taking care of children".