'My nose is crooked': Man hit by stray golf ball at Decathlon store

Mr Michael Kwok was in so much pain after being hit on the nose that he collapsed. He was taken to hospital where he was told he had a bone fracture in his nasal bridge. Police say investigations are ongoing.

What he thought was going to be just another visit to Decathlon Singapore Lab to "shop and walk around" ended with him in a heap on the ground in excruciating pain, with blood gushing from his nose.

A stray golf ball had allegedly hit Mr Michael Kwok, 40, on his nose at the sports megastore in Kallang last Friday at about 10.30pm.

Mr Kwok, an engineer, told The New Paper: "(My friend and I) were near the basketball section when all of a sudden, something hit my face.

"I had no idea what it was but all (I felt) was a sharp pain. It was so excruciating that I just lost my balance and collapsed (on the ground).

"The impact felt so great. My whole face was in so much pain that I did not even notice I was bleeding until my friend told me."

Mr Kwok suspects it was a golf ball that hit him after hearing what some around him said.

"I overheard a staff member saying it was a golf ball that hit me. It makes sense because what could be so small yet hard enough to (cause such an) injury? I doubt it was a ping pong ball," he said.

Amid the commotion, someone in the crowd called for an ambulance while others swiftly attended to him.

"The (people around me) were so kind. One of the shoppers said she is a trained nurse and checked my vitals," said Mr Kwok.

"Someone else also put a blanket on me because I was shivering so much." 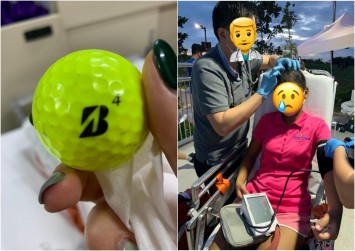 The Singapore Civil Defence Force said they received a call for assistance at 230 Stadium Boulevard - the address of Decathlon Singapore Lab - and took one person to Singapore General Hospital.

A police spokesman also confirmed that a report was lodged and investigations are ongoing.

At the hospital, Mr Kwok was told he had suffered a bone fracture in his nasal bridge.

"My nose is crooked. And I can't do anything about it now because the swelling needs to subside before any re-alignment (can be done)," he said, adding that he now eats with difficulty because of the pain.

"I still do not know who was responsible for hitting the golf ball. I was pretty far away from the golf (testing area) when it happened - maybe about 20m."

While it was a very painful incident, Mr Kwok felt it could have been worse.

"I think I am lucky that the ball did not hit my eye. If it did, I might (have been) blinded.

"I also am thankful that my three kids were not with me (when it happened).

"We usually go to Decathlon together, but that night, they were with my in-laws. I can't imagine what would happen if they had got injured instead of me."

"We treat all our customers as friends and our customers' safety is of utmost priority to us. We are investigating this incident and analysing the footage captured on our in-store CCTV (closed-circuit television)."

The spokesman added that it has reached out to Mr Kwok and closed the golf test zone at Decathlon Singapore Lab in Kallang.

"While our test stations have prominently displayed precautionary signage, we are now actively reassessing our testing stations and are committed to preventing a similar situation from happening in future," said the spokesman.

"Maybe Decathlon can consider having staff supervising these (test areas).

"Proper instructions should also be given (to shoppers) before they test out the gear to ensure the safety of everyone in the store," he said.

Decathlon customers that TNP spoke to said while testing areas at the store come in handy, they also pose a danger if left unmanned.

Mr Davis Tay, 37, who is self-employed, said he was trying out golf wedges about two weeks ago at the same outlet when two children ran into the testing area.

"I immediately stopped. I (cannot) imagine what would have happened if I hit the children," he said.

"There were no staff members around then and their parents were not nearby either. I even saw other children freely swinging golf clubs with people around."

Mr Tay, a father of two children aged six and seven, added that while it is important for staff to be supervising shoppers as they test out products, parents must also play a part in ensuring their children do not play with equipment that could end up hurting someone.

A housewife, who wanted to be known only as Mrs J. Lim, 24, said: "I've been to Decathlon (only a few times) but every time I go, I see children running amok like it is a playground."

Mrs Lim, who has two sons aged three and four, added: "Equipment left unattended with no staff around are just accidents waiting to happen.

"But most importantly, parents should always keep an eye out for their children (to prevent them) from getting hurt or hurting others unintentionally."

This article was first published in The New Paper. Permission required for reproduction