'My resources are limited': Hospital bill of Beach Road slashing victim at $48,000 and rising, says employer

The medical expenses for the victim of the slashing incident at Beach Road is close to $50,000 and rising, revealed her boss, Edmund Tan.

The victim, Han Hongli, is an employee at Chong Qing (Origin) Steamboat restaurant, owned by Tan.

He shared in a live Facebook broadcast on Thursday (April 21) that Han has undergone several surgeries for her injuries, including "major operations on both hands". In social media videos captured of the brutal slashing on April 14, Han's hand appeared to be almost severed by her estranged husband Cheng Guoyan, 45.

Tan added that "she is still quite badly injured" and is "still traumatised".

In a Sunday Times report today (April 24), Tan stated that when he first visited Han in the hospital, "The first thing she said was 'I am sorry'. She is still thinking about the restaurant despite being so badly injured."

Tan said he told her not to worry and to focus on her recovery.

The 50-year-old owner of the Beach Road restaurant added that his family has also been affected by the incident, and shared that Han had been an employee at the eatery since he started the business in 2015.

"She was with me for two years plus then she went back to China, and then she decided to come back [to Singapore]," said Tan, describing Han as "a very responsible person" and someone who is "happy-go-lucky".

Tan also stressed that Han "is not the flirtatious type", sharing with The Sunday Times that she had rejoined Tan's restaurant in June 2021, about a year after returning from China.

"She knows my shop inside out, and she knows the customers and everyone so well… so it is very sad," he added. "I think everybody here misses her."

According to The Sunday Times, Han had told Tan not to tell her older daughter who is in her teens about what happened to her. Han has two children who are being taken care of by her family in Henan.

Han also told Tan that she is afraid to look in the mirror.

In his Facebook live on Friday, Tan mentioned that he had gone to the hospital that day to visit Han but as she was receiving treatment for an eye injury, he did not get the opportunity to see her within the hospital's visiting hours.

"She will need a long time to recover. As of today, the hospital notified me that the bill is about $48,000," said Tan in the livestream. He noted that while Han, a work permit holder, is covered under medical insurance, the compensation amount is "minimal".

Come in and see Edmund!

As Han's employer, Tan is legally obligated to pay for her medical expenses, whether or not the health conditions are work-related.

Speaking to The Sunday Times on Thursday, Tan had explained that the $48,000 is for Han's week-long stay in hospital "and the bill is likely to go up even higher". He was also made to sign a letter of guarantee that he would bear the cost.

"The bill is really huge and I don't know how I am going to settle it," he shared. 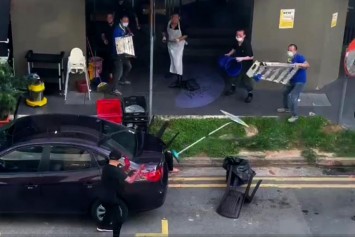 In his livestream, Tan also shared that Han would have to go through rehabilitative care after being discharged from hospital, which "will be very costly" as she is a foreigner.

Tan admitted that his "resources are limited" but he is currently looking into crowdfunding avenues to raise money for Han. "Please don't transfer money to me," said Tan, who had turned to selling food products on Facebook due to poor sales at the restaurant since the pandemic.

In response to a viewer praising shop owners in the area who have reportedly raised money for Han, Tan clarified that "we have not received anything for her yet", before deciding not to comment further.

"At this moment, I'm really glad that she's still alive, that's all I can say," said Tan, stressing that Han is someone who "deserves to be helped".