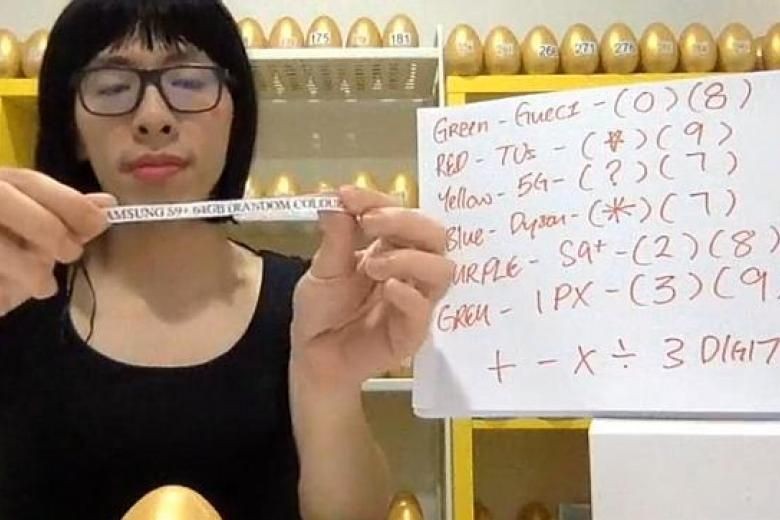 SINGAPORE - Mystery prize machines may have been banned here, but "game shows" with a similar concept continue to thrive online.

The games, on Facebook's Live platform, have gained traction among youngsters.

Last month, the police warned that operating mystery prize machines was an offence as they are considered a form of public lottery.

A selection of boxes are displayed in a machine, and users typically pay $10 to buy a box, which contains a mystery prize, including mobile phone accessories, luxury goods and gaming consoles.

In comparison, the online games feature numbered containers, such as golden eggs or charm packets that are sold for $5 to $20 each during a Facebook Live session.

Payment is made via bank transfer or services such as PayNow, and the host then opens the container on-camera to reveal the prize.

Mr Dyon Ng, 29, who hosts the Dyon Live Entertainment Game Show, has more than 1,700 followers on his Facebook page.

The Institute of Technical Education graduate told The New Paper that he does this full-time and about 50 people tune in to his daily show.

He said the largest purchase so far was by a viewer who bought about 80 golden eggs for more than $1,200.

"He won an iPhone X from one of the eggs, but not everyone wins the big prize," Mr Ng added.

A 64GB iPhone X retails for about $1,600 here. The prizes in the other eggs were much cheaper items such as phone accessories and earphones.

He said his highest viewership was 450 people since he started the game show in March after being inspired by The Fragment Room, which allows customers to vent by smashing items.

"Singapore is a stressful place, and I want people to laugh and have fun," added Mr Ng, who sometimes cross-dresses while hosting.

"Operating this game show is actually not sustainable at all, but it makes me happy and I enjoy engaging people on the Facebook Live platform."

iLoveSales.SG, another game show on Facebook, has more than 20,000 followers, with more than 3,000 watching its most recent stream. Attempts to contact its host were unsuccessful.

Criminal lawyer Rajan Supramaniam warned that such operations could run afoul of the law.

He said: "It may not be appropriate for Mr Ng to operate such an activity as it is targeted at the vulnerable and promotes gambling.

"There is a lack of transparency and participants behind the screen might be children."

Under the Remote Gambling Act, a person found guilty of providing an unlawful remote gambling service can be fined up to $200,000 and jailed up to five years.

If the gambling involves someone under 21, the offender can be fined up to $300,000 and jailed up to six years.

Clinical psychologist Carol Balhetchet likened the addictive potential of such games to that of smoking and alcoholism.

"It's a game of chance that young people might get addicted to, especially if they are desperate to win," she said.

"There is a danger of the game of chance taking control of their lives when they chase after short-term gratification."

When TNP told Mr Ng that what he is doing could be illegal, he said: "The authorities will likely step in soon, but honestly I'm not forcing anyone to buy the eggs.

"I'll probably do this for one or two more weeks because I also can't sustain the costs.

"After that, I hope to find other business opportunities on the Facebook Live platform and continue to make people happy."