Nas Daily vlogger on Singapore: If they can solve so many problems in 53 years, then why can't we?

SINGAPORE - The creator of popular video series Nas Daily, Mr Nuseir Yassin, left Singapore almost a week ago but that did not keep him from posting another video about the country on Monday (Sept 17).

Titled The Almost Perfect Country, the video, which is almost 5min long, is a departure from Mr Yassin's usual style of short, one-minute clips.

In it, the video blogger calls Singapore "a country that has the same problems as (the rest of the world), but has managed to find solutions".

ALSO READ: Viral vlogger Nas Daily says videos on Singapore are '100 per cent not sponsored by anyone'

Among the "solutions" featured in Mr Yassin's video are Singapore's multi-racial housing policy, limits on the number of cars, and Newater.

Mr Yassin said: "When I saw the way they build and do things, from water systems, to airports, to buildings, to gardens, I was amazed because all the problems above, they solved in 53 years since they gained independence."

I put my heart and soul into this video. I hope you it inspires you like it inspired me. It's the story of the...

The video also featured a guest appearance by Prime Minister Lee Hsien Loong, who is filmed walking at the Gardens by the Bay. 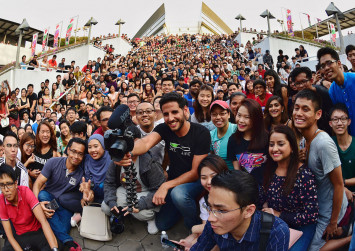 In the video, Mr Lee said: "This is what we have been building in Singapore for 53 years, and we'll be building it for many more years to come."

Mr Lee later shared Mr Yassin's video on his Facebook page, saying that he was glad to have caught up with Mr Yassin, and that the latter's perspective on Singapore is "fresh and unique".

He added: "Often, an outsider can help us see ourselves in a new light."

Glad to have caught up with Nas Daily on his recent visit here. His perspective of Singapore is fresh and unique. Often...

Mr Yassin acknowledged in his video that Singapore has its fair share of problems, including inequality, high prices, the low wages of foreign workers, and the Government being too restrictive.

However, he also said: "Singapore has many problems, but unlike many (other countries), they are trying to fix them."

The vlogger added: "I love Singapore because there's a lot we can learn from them! If they can solve so many problems in 53 years, then why can't we?"