Instead, the 24-year-old ended up being warded at Sengkang General Hospital on Sunday after suffering a head injury.

Miss Raihanah, who plays for the Vanquishers Hockey Club, had collided with an opponent during a 4-1 defeat by Crescent Hockey Club in the National Hockey League match.

The incident at the Sengkang Hockey Stadium also sparked concerns after a delay in medical assistance. With no medical personnel on standby, it took at least an hour before an ambulance was called.

Miss Raihanah said yesterday that doctors told her the collision caused her to suffer a stroke, which was evident from the "small black dots" that showed up in her brain from an initial magnetic resonance imaging scan.

She has been unable to walk on her own because she suffers from dizzy spells.

The doctors have not said when she can be discharged, as more scans are planned in the coming days.

She told The New Paper how she felt after the collision: "It felt as if my brain was shaking. I was in so much pain. It was a feeling I had never felt before.

"Normally, my instinct would have been to get up, but I could not feel anything from my neck down. My body was just numb. I closed my eyes and wished for the pain to stop."

Match officials told the players to carry Miss Raihanah to the sidelines and continue with play, with four minutes left of regulation time. 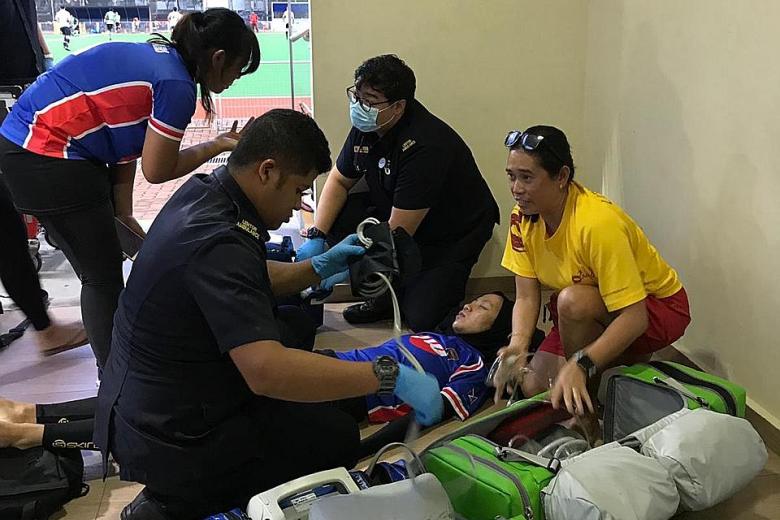 "I was shocked they were told to carry on. Clearly, the officials were not taking my injury seriously," said Miss Raihanah, who has been playing hockey for 15 years.

"Does it take someone to die for them to realise that they should take injuries in the game more seriously?"

After the match ended, her teammates carried Miss Raihanah to a covered area, where lifeguards from the nearby swimming complex assisted her with a portable oxygen tank as she had breathing difficulties .

One of her teammates, Miss Syahreena Zainudin, told TNP that players from both teams were at a loss as to what to do, with no guidance from the officials. An opponent applied an ice pack to her head.

"She told us it was not the SHF's business to call for medics or an ambulance. She said we had to handle the situation on our own," Miss Syahreena alleged.

When TNP contacted Miss Lim, she denied the allegations and declined to comment further.

Another teammate, Miss Syasya Ruzana, who is also the club's head committee member, wants the SHF to review its protocol. She said: "This was a head injury and yet we had to be the ones taking a decision on what to do.

"Our players were panicking and just looking for guidance. The first response from the officials is unacceptable. There must be a change in how we deal with injuries."

In the end, a staff member in the swimming complex called for an ambulance.

SHF president Mathavan Devadas told TNP that his team would investigate the matter.

He said: "Before the season started, we had discussions with the clubs and it was decided that they will be handling matters related to injuries."

He added that the SHF will render any assistance needed to Miss Raihanah and that as a national athlete, she is covered by insurance. "We will have to speak to the clubs again and work together on a more robust protocol in dealing with injuries that occur during the game."

When told of the SHF's response, Miss Raihanah said: "The situation could have been handled better. Hockey is a dangerous sport and there should be at least a medic on standby or some kind of protocol when dealing with injuries. There was no urgency when I got injured and I do not want another player to go through that."