The Karim Family Foundation, which is set up by the family of Indonesian tycoon Bachtiar Karim and his wife Dewi Sukwanto, has given the Singaporean $200,000 to reward him for his exploits at the World Championships, and to urge him to continue pursuing his dream of winning an Olympic medal.

The foundation had contacted SPH Media Trust's Chinese Media Group to get in touch with the Singapore Badminton Association (SBA) in order to make the contribution last week.

Karim is ranked 10th on Forbes' list of Indonesia's 50 richest in 2021 with a net worth of US$3.5 billion (S$4.73 billion). He runs Musim Mas, an integrated palm oil firm, with his brothers Burhan and Bahari.

The 65-year-old is known for his philanthropy, with Musim Mas Holdings having gifted $2.27 million to Karim's alma mater, the National University of Singapore, to start a professorship in sustainability in its business school in 2010. The company also donated $5 million to various causes, including the Singapore General Hospital and the Alzheimer's Disease Association, in 2020.

His son Chayadi Karim, one of the foundation's principals, told Lianhe Zaobao: "We always believe in giving back to society and supporting various community programmes. The purpose of this incentive is to make him a role model for youths. 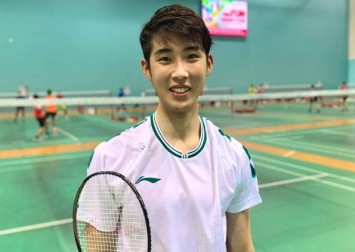 "I feel Loh Kean Yew is an impressive young man. Competition among badminton's elite is very intense. One needs not just good technique, but also strong will to succeed. I have observed this young man for a long time now and I very much admire his indefatigable spirit.

"We hope Kean Yew can continue playing good badminton without any worries. We want to show that it is good to pursue sports not just as a hobby, but also as a career. We hope more young aspiring athletes will follow in his footsteps so that Singapore's sporting standards can be raised."

Karim's daughter Cindy Karim, who is also a principal of the foundation, was also quoted in Lianhe Zaobao, saying: "Our entire family has been stirred by Kean Yew's fighting spirit. We are also moved by his humility after achieving such great success. We hope to inspire more to be like him for the future."

The Karims' gesture takes Loh's rewards kitty to over $495,000. This includes money from a crowdfunding exercise initiated by Wei Chan, an SBA committee member, on a personal basis on Jan 2, which drew more than 700 donors who contributed $165,299. Local business leaders and individuals, as well as SBA and its equipment and apparel sponsor Li-Ning have also chipped to the tune of $130,000.

The pot could increase to $1 million as The Straits Times understands that the SBA is in the midst of negotiating a multi-year, six-figure sponsorship deal.

Loh, who is currently competing at the India Open, said: "I am very grateful to the many sponsors and well-wishers like Mr Karim who have offered various rewards and encouragement following my win. For athletes, this is a recognition of our hard work and sacrifices.

"Doing my best and making my country proud have always been my priority. Knowing that there are many people out there who are very supportive, generous and encouraging towards local athletes means a lot to me.

"I am also very thankful for Sport Singapore, SBA, Li-Ning and Singapore Sports School as they have been taking care of me and stuck with me every step of the way since I came to Singapore.

"There are too many people who have helped me in my life and I can never thank them enough. Without all the support and encouragement, I wouldn't be standing on the podium."

On Dec 19, Loh became the first Singaporean to win the World Championships. But the 24-year-old did not pocket any prize money as the tournament is one of two major events in the sport — the other is the Olympics — that do not offer any financial incentives.

He is also not eligible for the Singapore National Olympic Council's Major Games Award Programme — which is funded by the Tote Board Group — as it applies only to the SEA, Asian, Commonwealth, and Olympic Games.

SBA president Lawrence Leow was also encouraged by Karim's "significant donation" and the outpouring of support for Loh since his momentous win.

He added: "Kean Yew's feat has now captured the imagination of generations of future badminton players and is a powerful testament that despite being a small nation, we can achieve excellence with the support of everyone in Singapore.

"Every source of encouragement — be it through scholarships, donations, sponsorships or words of encouragement - is deeply appreciated by everyone at the SBA as it means a lot to the athletes, coaches, staff and management.

"With the continued support of Sport Singapore and sponsors, we are inspired and well-placed to groom more players to give Singaporeans more reasons to cheer in the coming years."