Over the decade that he has lived in Singapore, Mr Chavda Ankur A. has made it a tradition to watch the National Day Parade on television and participate in the festivities.

This year, he has another reason to celebrate.

Mr Ankur, who is from India, became a Singapore citizen on Wednesday.

"It feels special because I am celebrating as a Singaporean now," he told The Straits Times at the annual Teck Ghee National Day observance ceremony yesterday.

Read Also
NDP 2019: Stand up, stand up for Singapore 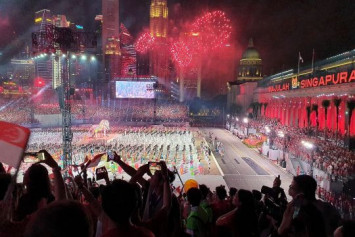 The yoga instructor met his Singaporean wife in one of his classes, and the couple have a five-year-old son.

"Singapore feels like home, and it is nice to feel like I am now a part of it, especially since my wife and son are citizens," said Mr Ankur, 32.

Mr Ankur and his family were among some 2,500 residents, national servicemen, new citizens and students at the event.

Prime Minister Lee Hsien Loong, who is MP of the Teck Ghee ward in Ang Mo Kio GRC, joined a community walk in the morning and handed out flags to residents along the way.

Mr and Mrs Lee also soaked in the festivities, which included music and dance performances at Teck Ghee Community Club.

Ms Cherilyn Jefferson, a teacher at Pathlight School, helped to lead a recital of the Singapore Pledge.

"I am proud to be able to represent Eurasians among the different races here, and I hope Singapore will continue to grow in harmony," said Ms Jefferson, 40.

Housewife Janet Low, 32, said that her two children woke up at 6am to paint the Singapore flag on their cheeks before heading to the community club.

"They are very excited. This is one of their favourite holidays because of the fireworks at the parade," she said.

"Hopefully, they can stay up long enough to catch it."