PM Lee said allowing nurses to wear the tudung has become a "focal issue" for the community. PHOTO: ST FILE

SINGAPORE - From November, Muslim nurses in the public healthcare sector here will be allowed to wear a tudung with their uniforms if they wish to, said Prime Minister Lee Hsien Loong in his National Day Rally speech on Sunday (Aug 29).

Making the announcement when he spoke in English, PM Lee said Singapore is ready to make this move.

Currently, in some places where uniforms are required, the Government has not allowed the tudung to be worn.

The Muslim community has generally understood and accepted the Government's stance on this but policies on race and religion must be adjusted from time to time, PM Lee said.

He acknowledged that wearing the tudung has become increasingly important for the Muslim community; it reflects a general trend of stronger religiosity in Islam, around the world, in South-east Asia and in Singapore.

It has also become an important part of the faith of many Muslim women. Over the last few decades, more Muslim women here have worn the headgear, both in social settings and at the workplaces, he noted.

And allowing nurses to wear the tudung has become a "focal issue" for the community, he added.

PM Lee said that in 2014 when there was intense discussion about the headgear, he had a closed-door meeting with Muslim leaders who explained to him why the tudung was important to the community, and that they hoped it would be allowed.

The PM's reply to them then was that he understood how strongly they felt, but he also explained the Government's perspective, and the reasons behind Singapore's policies, which he sketched out on Sunday.

In the case of schools, all students don the same uniform regardless of their financial background, race or religion, as there is a need to emphasise their similarities and minimise their differences so they can build bonds in their early years that will shape their attitudes.

For the Singapore Armed Forces (SAF), Home Team, and other uniformed services, Singapore must maintain the status quo because they are impartial and secular arms of the State who are armed and enforce laws here. "They must always be seen to be doing so without fear or favour. Therefore, everyone wears the same uniform," he said. 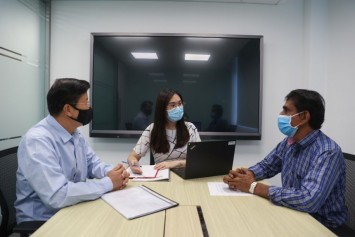 The considerations, though, are more finely balanced for nurses.

Patients in a hospital are often anxious and ill, so it is important that they see all nurses as the same, he explained.

Nurses must also feel equally comfortable caring for all patients, regardless of race or religion. "We don't want a visible distinction in the nurses' attire to make this harder to achieve," said Mr Lee

But he told the Muslim leaders in 2014 that the policy in the healthcare sector was not set in stone, and that the Government would monitor the situation.

Since then, it has observed that interactions between the races remain largely comfortable, with non-Muslims becoming more used to seeing Muslim women in tudung. These women are generally also at ease interacting with people of other faiths.

Specifically in hospitals, some of the non-uniformed staff don the headgear too, and the Government saw that their relationship with patients and colleagues was alright.

He said that he met Muslim leaders again a few months ago to thank them for managing this sensitive issue all these years and told them that the Government is ready to let nurses wear the tudung with their uniforms.