The officer was caught vaping just after issuing a summons to a man for smoking illegally.

An enforcement officer from the National Environment Agency (NEA) was terminated after he was caught on video vaping just after issuing a summons to a man for smoking illegally.

Responding to queries from The New Paper, an NEA spokesman said the Health Sciences Authority (HSA) has also taken enforcement action against the officer under the Tobacco (Control of Advertisements and Sale) Act.

"The NEA is aware of an online video which shows an outsourced NEA enforcement officer using an electronic vaporiser," she said.

"We investigated the incident immediately and confirmed that the outsourced enforcement officer had indeed used an electronic vaporiser.

"On NEA's instruction, the service provider has removed the officer from our contract."

The enforcement officer had caught a man smoking illegally in Golden Mile Tower, Beach Road, at about 5pm on Nov 16.

He attempted to issue a summons to the man, who was not cooperative, and the police were called in to provide assistance.

After the summons was issued, the enforcement officer went outside the building and used an electronic vaporiser while chatting with another man, believed to be his colleague. 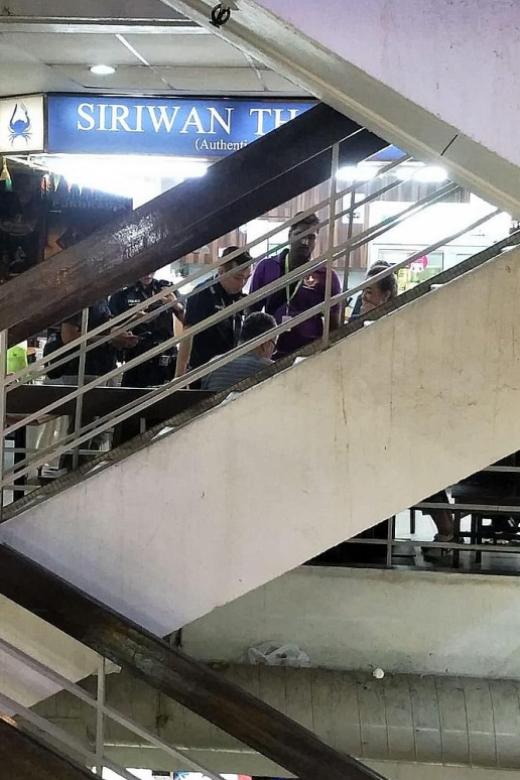 The officer was caught vaping just after issuing a summons to a man for smoking illegally. Facebook/Sam Sam

He was spotted by Mr Sam Leck, 46, a contractor, who took a video and posted it on Facebook later that evening.

In the post, Mr Leck questioned why the enforcement officer was allowed to use an electronic vaporiser when it is banned in Singapore.

Mr Leck told TNP: "He (the officer) issued a summons to an old man in the building and I took a photo because the police came. But a short while after, when the police had left, I saw the officer vaping outside with his friend."

The post went viral, and has been shared more than 3,900 times and received more than 150 comments as of yesterday evening.

Many netizens demanded a response from NEA, commenting on the irony of the situation.

Since February last year, it has been illegal to possess, purchase or use e-vaporisers, and offenders can be fined up to $2,000.

Anyone found guilty of selling, importing or distributing e-vaporisers can be fined up to $10,000, jailed for up to six months, or both.