Nearly 130 PMDs seized in May for flouting rules

Nearly 130 personal mobility devices (PMDs) were seized by the authorities last month in an ongoing drive to deter errant users.

The seizures come amid growing debate over whether such devices should be allowed to share the pavement with pedestrians.

In a video posted on Facebook yesterday, the Land Transport Authority (LTA) said it had impounded a total of 157 devices - 127 PMDs and 30 e-bikes - for offences such as not complying with regulations and riding on the wrong paths.

LTA officers caught 325 users last month in enforcement operations islandwide. Of these, 151 rode on the wrong paths while 92 used devices that failed to comply with regulations.

Under the Active Mobility Act, which came into force in May last year, PMD users can have their devices seized if they ride on the road, speed or if their devices exceed stipulated limits like the maximum weight of 20kg.

The latest seizures come after LTA officers impounded more than 400 devices between February and April this year.

In all, more than 3,700 offences were committed under the Active Mobility Act in the first year.

"Commercial operators should make use of programmes like the Safe Riding Programme to educate their staff on safe riding techniques, especially since they will be in the public spaces more often," he added.

More rules governing PMDs will kick in next month, with those found riding unregistered e-scooters on public paths facing a maximum fine of $2,000 or up to three months' jail for a first offence. 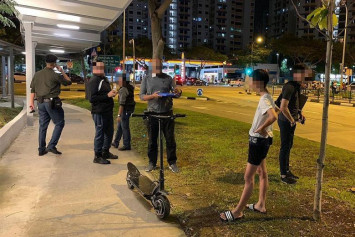 More than 75,000 e-scooters have been registered since the beginning of this year, said the LTA.

Concerns over the potential conflict between PMDs and pedestrians arose recently, with Bukit Batok MP Murali Pillai calling for the devices to be banned from Housing Board void decks at a Parliament sitting last month - after one of his residents got into an accident with a PMD user at her block.

Following the debate, readers wrote letters to The Straits Times calling for Singapore to follow in the footsteps of France and Germany, which banned the use of e-scooters on pavements last month.

In response, the LTA said such a ban was not the solution, and that it was taking a "more holistic approach" that included enforcement, public education and enhancing infrastructure.

Dr Teo Ho Pin, coordinating chairman of the 15 town councils under the People's Action Party, told ST that the by-laws of the town councils are still being reviewed to bring them in line with the Active Mobility Act, including the possibility of banning PMDs from void decks.

"Otherwise, it is unproductive to keep talking about what would be effective measures (in ensuring safety)," he said.