The latest CGH cluster, which has a total of 14 cases, is separate from an earlier active cluster with 4 cases.

The latest CGH cluster, which has a total of 14 cases, is separate from an earlier active cluster with four cases.

There are also 29 new cases linked to staff in several  bus interchanges, with the total now at 377 cases.

The Boon Lay Bus Interchange cluster had the sharpest increase of 12 cases, bringing its total to 87 cases.

The cluster at Toa Payoh Bus Interchange, which has the highest number of cases among the bus interchanges, increased by eight cases, bringing its total to 115 cases.

The Clementi Bus Interchange cluster went up by four cases, and now stands at 29. 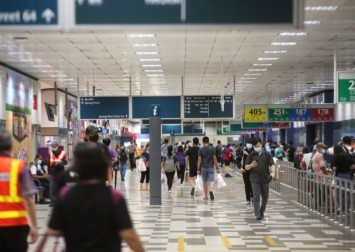 In all, there were 216 new locally transmitted cases reported on Friday and three imported cases for a total of 219 cases.

There were also 109 unlinked cases, or more than half of the locally transmitted cases on Friday.

The MOH, in its daily update, said there are now 59 active clusters, ranging between three and 1,155 infections each.

The number of new cases in the community has increased from 484 cases in the week before to 1,020 in the past week.

The number of unlinked cases also rose from 126 cases to 401 cases over the same period.

There are 580 patients who are hospitalised. There are 20 people who require oxygen supplementation, and five are in critical condition in the intensive care unit. In this group, 10 of the patients are fully vaccinated.

MOH added that over the past 28 days, 7.3 per cent of those who are unvaccinated became severely ill or died, while the proportion of those fully vaccinated in this category is 1.1 per cent.

Of those who have fallen very ill, 19 are seniors aged above 60. Of these, 11 are unvaccinated or partially vaccinated.