SINGAPORE - On their own, upcoming changes to the Primary School Leaving Examination (PSLE) scoring system will not be effective in cutting the over-reliance on grades and preparing Singapore's young to meet the manpower needs of a changing modern economy, said Education Minister Ong Ye Kung on Sunday (July 28).

But they must be seen in light of significant reform to the education system, he added, citing other changes such as phasing out of streaming in secondary schools by 2024 and the introduction of aptitude-based admissions at universities and polytechnics.

"This is a period in which the education system is undergoing significant reform, not by one single measure but by a whole package of measures that we have systematically implemented over time. Under this system, we will be able to better prepare our children for the future," said Mr Ong.

Speaking to reporters on the sidelines of an event in Sembawang GRC, where he is an MP, Mr Ong was responding to public feedback over changes announced last Thursday to the PSLE scoring system.

The Ministry of Education (MOE) said that from next year, Primary 5 pupils will be graded according to the new PSLE scoring system to help them get used to it, ahead of its implementation for Primary 6 pupils in 2021.

Under the new system, pupils will be graded according to broad achievement bands, which can result in 29 possible scores, instead of the current T-score system, where there are more than 200 variations. 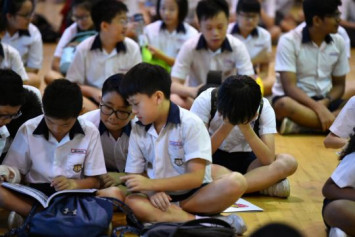 This is part of a larger move away from an overemphasis on grades, and is aimed at measuring a child's own level of achievement, apart from that of his or her peers.

Mr Ong said on Sunday that the new system is unlikely to affect matters such as the percentage of students who progress to secondary school or those who end in the Express stream.

Given this - and the fact that pupils will still be graded based on the Achievement Levels scoring system - parents may be left wondering what the "big deal" is with changes to the PSLE scoring system, he said.

"So how is this going to solve that when everything still seems the same?" he said, noting he had been monitoring reactions to the changes from parents, teachers and pupils.

Mr Ong compared the two, saying that while the T-score system is similar to a national running competition, the new scoring system is akin to the Individual Physical Proficiency Test (IPPT).

"In a competition, timing is one thing, but it's secondary to your placement, which depends on who is ahead of you and who is behind you."

As with the IPPT, under the new system, pupils will be graded on their own merits and not be compared to others, he said.

"They can focus on their own achievements, as opposed to having to be compared to others," he added.

Mr Ong also noted that parents may be anxious about what the new PSLE scoring system means for entry into secondary schools, and whether those who take Foundation-level subjects are less likely to make the grade for the Express stream.

However, the band for the Express stream stretches from four points to 22 points, he pointed out.

"So it doesn't mean that if you take a Foundation subject, you cannot go into the Express stream," said Mr Ong, though he noted the new system may take some time to get used to.

The MOE explained last Thursday how Foundation-level subjects for pupils needing extra help will be scored under the new system.

The total points for all four PSLE subjects will be used to determine the secondary school posting.

Out of every 10 PSLE pupils, one takes at least one Foundation-level subject.

While parents may find the new system complicated, it is in fact "very similar" to the grading system already in use for the GCE O-, N- and A-level examinations, said Mr Ong, describing it as a "much more transparent system", as there is a score for each subject, compared to the single result for T-score grading.

"I am quite confident that by 2021, there won't be any confusion, and people will understand the new scoring system and how the aggregate is calculated."

Parents and pupils cannot look at the PSLE with the perspective that it is a "do or die" examination, he said.

Describing the PSLE as just one part of "a very long life-long learning journey", he said: "The child has a lot more to learn throughout his life. So this is just one checkpoint."