Visitors to the Botanic Gardens can now walk along a 350m-long hiking trail, taking them past the new highest point in the park — 40m above sea level.

They can also enjoy plants from habitats found in the tropical hills of Southeast Asia as they hike along the Mingxin Foundation Rambler's Ridge, which opened on Saturday (Oct 19).

The ridge is part of the Gallop Extension, situated just beyond the western boundary of the Unesco World Heritage site. The 8ha extension is about the size of 11 football fields and brings the garden’s total area to 82ha.

The Gallop Extension is located in Gallop Road. Visitors can access it via a 200m bridge extending across Tyersall Avenue from the Learning Forest, starting next year.

The plan was first mooted four years ago, said Minister for National Development Lawrence Wong, who was the guest of honour at the launch.

"Some of you may know that when the Gardens was established 160 years ago, it had only 22 hectares of space. With the plans and the Gallop Extension, today it will be almost four times the size, at 82 hectares," said Mr Wong.

He encouraged visitors to attempt the ridge-top hike, if they are "feeling very adventurous". Previously, the highest point in the Botanic Gardens was 35m at Burkill Hall.

Mr Shee Zhi Qiang, director of horticulture and operations at the Singapore Botanic Gardens, explained that the Mingxin Foundation Rambler's Ridge is another recreation of a natural plant habitat, like the wetlands and lowlands forests at the Learning Forest. 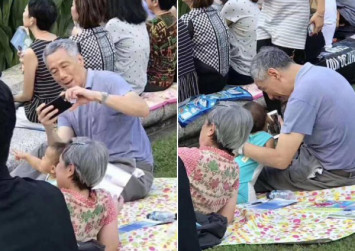 "On a ridge, it is noticeably windier, with a constant breeze. There are at least 150 species of plants there currently. Some of the plants here are from other places in Singapore, like the nature reserves and offshore islands," he explained.

The ridge-top walk is one of two new features of the garden, along with the OCBC Arboretum.

The arboretum holds 2,000 trees of over 200 species of dipterocarps, which are forest giants that can grow to more than 80m. It is also the first arboretum in South-east Asia to use an Internet of Things system to monitor the trees as they grow.

Mr Wong, who is also Second Minister for Finance, announced that next year, two conservation houses will open at the Gallop Extension.

"One of them will be a Forest Discovery Centre, where visitors can learn about different forest habitats through exhibits, workshops and activities on forest ecology," he said.

The other is a Botanical Art Gallery, where visitors can browse rare books and artworks that have been archived from almost 130 years ago.

The 14-volume series will catalogue the over 3,000 species of plants in Singapore, said Dr David Middleton, coordinating director of research and conservation at the Singapore Botanic Gardens.

"The main purpose of it is to set a catalogue of all the species of plants we have in Singapore. Because only by knowing what we have, can we find out if we have new things coming in the future. Also, we have to be able to know what we have and where it occurs, to find out what's very rare or what could be threatened," he said.

The first three volumes took over 100 experts two years to work on. The other 11 volumes will be completed and released over the next seven to eight years, Dr Middleton added.