'I have never seen flames that big in my life': 3 unconscious people rescued from flat in Bedok after PMD fire

The aftermath of the fire at Block 27 New Upper Changi Road, believed to be caused by a personal mobility device charging in the living room.

SINGAPORE - Three unconscious people were rescued from a flat in Bedok after a fire, caused by a personal mobility device (PMD) charging in a living room, broke out on Wednesday (March 9).

When Singapore Civil Defence Force (SCDF) personnel arrived at Block 27 New Upper Changi Road at about 1.15pm, one occupant who had evacuated with a baby told them there were still people in the burning three-room flat, SCDF said in a Facebook post.

Firefighters entered the fourth-floor unit and found the three unconscious people in a room. One of them was not breathing, and was given cardiopulmonary resuscitation before she was sent to Changi General Hospital (CGH).

A man identified himself as the one who fled with the baby, whom other block residents told The Straits Times is his nephew. He said: "It is a tragedy that happened to our family." He declined to give further comment.

A total of four people were taken to CGH and Singapore General Hospital, including a resident from a neighbouring unit who suffered burn injuries on her shoulder when she was evacuating before the SCDF officers arrived.

About 50 residents were evacuated by the police as a precautionary measure, SCDF said.

The fire was extinguished with one water jet.

When ST arrived at the scene at 4.30pm, charred debris could be seen on the fourth floor and cleaners were washing the corridor floor.

Resident Tan Eng Hok, 70, who lives two doors from the affected unit, said he was surfing the Internet on his phone when he saw smoke along the corridor.

The part-time airport worker, who has lived in the block for around 10 years, said: "It was very scary, I have never seen flames that big in my life.

"My maid and I quickly filled up buckets of water and tried to fight the fire. At one point, I felt the heat on my skin, but I knew I had to help.

"I don't know (the residents in the affected unit) but I had to help them."

Another resident, Mr Tan Toh Guan, 84, was reading the newspaper when his wife told him she smelt smoke.

Mr Tan, who lives next to the affected unit, said: "The smell got stronger so we just evacuated immediately. We didn't think about taking anything with us. We just wanted to be safe."

Read Also
PMDs must conform to safety standard by 2021 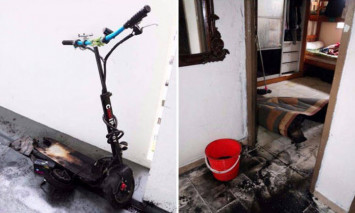 Ms Jen Reyes, 37, was working from home with her husband when the lights and fan in their living room suddenly shut off.

"I looked out the window and saw smoke. The first thing that went through my mind was that we have to get out now," said Ms Reyes, who works in IT and has been living in a corner unit on the third floor for a year.

Ms Reyes, whose five-year-old daughter was in school when the fire broke out, said: "It's a good thing she wasn't at home then. I think it would have been really scary for her."

Preliminary investigations showed that the fire was of electrical origin from a PMD which was charging in the living room, SCDF said. It said there were also two power assisted bicycles, one inside the unit and the other outside.

It added that non-UL2272 PMDs and any form of modifications to PMDs pose a fire risk, and urged owners to dispose of their devices at the appropriate recyclers.