The pilot for pubs and bars is expected to kick off by December.

SINGAPORE - Clubbing and karaoke singing under the Government's proposed nightlife pilot programme will only be open to local residents and those with work passes, who must show proof of having taken a Covid-19 test in the last 24 hours before they can enter a joint.

Clubs that are part of the pilot will have a capacity limit of up to 100 people, with separate dancing and dining zones that can hold 50 people each. Along with wearing masks on the dance floor, customers will have to stay 2m apart from other groups, indicated by floor markings and physical barriers. No live entertainment and performances will be allowed either.

Meanwhile, karaoke establishments will be allowed to have groups of up to five people within enclosed rooms that will have to be cleaned, disinfected and aired for 15 minutes between groups. Eating and drinking will be allowed within the rooms.

In both types of venues, no hosts will be allowed to be deployed to interact with customers, as a measure to reduce interactions.

The proposed safe management measures for patronising nightclubs and karaoke establishments, as well as the conditions for businesses to pivot and exit the industry, were among details shared by the Singapore Nightlife Business Association (SNBA) in a press conference on Monday (Nov 9).

Last week, the Government announced that there will be a cap of 25 establishments that can participate in a two- to three-month pilot programme for entertainment venues to reopen here, with strict safe management measures in place.

The pilot for pubs and bars is expected to kick off by December, while the one for karaoke establishments and nightclubs will only begin by January next year. Under the pilot, pubs and bars will be subject to the same rules as restaurants, and their customers will not be required to undergo pre-entry Covid testing.

SNBA said it has received around 60 queries since last Friday from businesses wanting to participate in the pilot programme.

But while there has been a lot of "interest and excitement" in the pilot, given its experimental nature, SNBA president Joseph Ong cautioned that participation will be "onerous", given the strict rules.

Mr Ong likened it to a "phase one clinical trial, where the samples are very small, and the observation period rather long, with possible changes in the test parameters along the way".

Read Also
Selected nightspots in Singapore may be able to reopen by December; others to pivot or exit 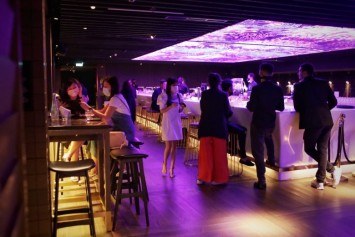 "So they should not be regarded as an alternative for the operators to reopen," says Mr Ong. "The chances are low that they will be selected, and the trial requires extreme planning and care."

Businesses that are part of the pilot will have to bear the costs of Covid-19 tests for patrons, which the association estimates cost between $30 and $100 per test.

"We are hoping that whoever comes to us with proposals for the pilot takes into account that customers are likely going to have to absorb the cost of the tests," said Mr Ong.

However, SNBA also said it will look into partnering clinics and companies that do testing, in hopes of reducing costs.

Along with an industry-wide briefing on the different options for business owners, SNBA said it will release an online application form on Wednesday for nightlife businesses - namely bars, pubs and nightclubs - interested in joining the pilot. Applications for karaoke establishments will be handled by the Singapore Entertainment Affiliation (SEA).

The Government announced last week that nightlife establishments which are not participating in the pilots can apply for financial support packages to either pivot to food and beverage operations or other commercial uses with a grant of up to $50,000 from Enterprise Singapore (ESG). They can also choose to exit, with a one-off payment of $30,000 to defray business cessation costs. Applications for both will have to be done by March 31.

So far, SNBA has received around 90 queries about pivoting and exiting options, the former of which includes a 12-month temporary change of licence - from nightlife to F&B or commercial business - that will be expedited.

The pivot grant will support costs such as renovations and third-party consultancy fees, and includes a 20 per cent cash advance.

As the nightlife scene contends with being among the last few industries to reopen, SNBA secretary Andrew Ing said he hopes the pilot programme can be a template to kick-start the recovery process and reopen nightlife businesses safely.

"It's about trying to find something that's going to work in the industry, in the long term, until a vaccine is found," said Mr Ing.

"We're also hoping that operators will come up with their own innovative ideas for how their customers will be kept safe... It's not easy, because nowhere in the world has anyone come up with a good way of doing this."