Netizens were whipped into a frenzy after a Facebook video showing a dolphin repeatedly hitting its head against the side of its enclosure was alleged to be one of those found in Resorts World Sentosa's S.E.A. Aquarium.

That led netizens from Singapore and beyond to voice their concerns over the animals' well-being.

However, no abnormal behaviour was observed in the attractions' dolphins, NParks veterinarians said after checking in on them, reported TodayOnline.

The 27-second-long clip was uploaded onto Facebook by Empty the Tanks, an organisation dedicated to ending whale and dolphin captivity, by a supporter on Dec 1.

The post has since been shared almost 2,000 times, garnering over 200 comments from concerned netizens.

Some very concerning footage has been brought to our attention by an Empty The Tanks Supporter of a dolphin repeatedly...

Although the caption claimed that the video was taken at the S.E.A. Aquarium in Resorts World Sentosa, the resort's spokesperson said: "We are uncertain of the source of the video."

The spokesperson then went on to explain how dolphins were naturally inquisitive and playful.

"As part of their natural behaviour, they communicate with each other through echolocation, making high-pitched clicking sounds and other playful actions such as nudging objects using their rostrums to attract attention."

Dr Chua Tze Hong, director of the Animal and Veterinary Service (AVS), said in a statement on Dec 5: "Our veterinary team visited the Resorts World Sentosa’s (RWS') dolphin facility and did not observe any abnormal behaviour during the visit.”

He also assured netizens that AVS "takes a serious view on ensuring that animal businesses comply with licensing requirements to safeguard animal health and welfare." 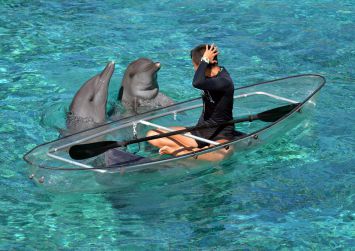 When the resort made the decision to include 27 wild dolphins from the Solomon Islands as part of its attraction in 2012, it was met with much pushback from animal activists. Two years before they were due to arrive in Singapore, two of the dolphins died of bacterial infections.

A third died on route to Singapore in 2012 due to an acute infection.

After the death of a fourth dolphin in 2014, the resort saw a resurgence of discontent from several animal welfare groups, such as the Animal Concerns Research and Education Society and the Society for the Prevention of Cruelty to Animals.