'No Covid-19 clusters linked to Zouk': Nightclub's closure till May 10 due to intermingling among guests

On May 1, Zouk said on Instagram that it would shut its doors at midnight until May 10. ST PHOTO: SYAMIL SAPARI

SINGAPORE - Zouk's closure until May 10 was triggered by an incident of intermingling among guests on April 23, said a spokesman for the iconic nightspot.

The area of the Clarke Quay premises where it happened had no fixed security personnel stationed and patrol was also not conducted there at the time the incident occurred, he told The Straits Times on Monday (May 2).

"We have stepped up safe distancing measures and doubled our security headcount to ensure that our guests' safety is not compromised," he added.

Zouk has also cordoned-off dance areas and checkpoints to and from the dance floor.

The spokesman said since safe distancing measures were relaxed on April 26, there has been no cap on the number of patrons per table.

There are no Covid-19 cases or clusters linked to Zouk, he added.

"Our guests' safety is our utmost priority and we continue to work closely with the authorities."

When Zouk reopened its nightclub's doors on April 20 after a two-year hiatus amid the pandemic, long queues of clubgoers formed outside its premises.

The club announced previously that it will operate every Wednesday, Friday and Saturday from 10pm to 3am.

On Sunday, Zouk said on Instagram that it would shut its doors at midnight until May 10. 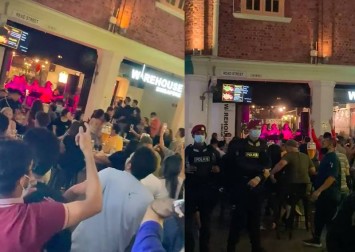 It said then: "The safety of our guests is a priority. We have stepped up safety distancing measures and doubled our security to ensure this".

Last Friday, the police said two outlets were issued closure orders after they were found to have breached safe management measures.

Those included failing to check the vaccination status of patrons and minimise physical interactions between customers and staff.

ST understands that Zouk was not one of the two outlets penalised.

Zouk, which can admit 1,500 people at 75 per cent of its capacity under Covid-19 safe management measures, has decided to cap its nightly crowd size at 500 for now.

Zouk's other establishments - Capital Kitchen, RedTail and Phuture - will remain open for business as usual.

#zouk #night activities #In Case You Missed It