No foul play: Elderly man with bloody nose at Whampoa was not knocked down by e-scooter, say police

When Facebook user Sam GK saw an elderly man sitting on the ground of a void deck at Block 17 Jalan Tenteram with blood soaking through his mask on Tuesday (May 18), he thought the worst.

A child later approached him to tell him "someone riding an e-scooter accidentally hit the old man".

In a post on Monday (May 24), GK said the 71-year-old had allegedly nodded when asked if someone on a personal mobility device (PMD) had collided with him from behind, though he did not remember the person's face.

"I believe his memory is rather poor, or he might suffer from dementia, like my mother," he wrote.

While social media posts alleged that the senior was involved in a hit-and-run accident with an e-scooter, the police told AsiaOne that preliminary investigations had shown "no foul play [was] suspected as the man had fallen down on his own and was not knocked down by a PMD."

The police said they were alerted to a suspected case of rash act causing hurt that day.

GK had spotted the senior while passing through the area and noticed several passers-by staring at the old man.

While attending to his injuries, he learnt the senior had fallen flat on his face and suffered a broken nose as a result. In an attached video, a woman could be heard saying an ambulance was on its way.

While waiting for the ambulance to arrive, Sam asked if the elderly man could remember what had happened but the latter shook his head. The senior couldn't recall anything else, not even his family member's contact details.

The injured man was then taken conscious to Tan Tock Seng Hospital, the Singapore Civil Defence Force confirmed with AsiaOne.

PMD not allowed on pedestrian-only paths 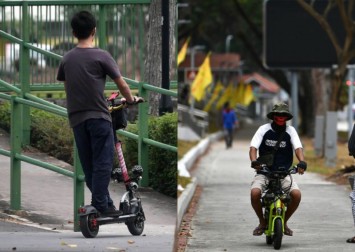 E-scooters have been banned from void decks on Sept 1, 2019, as well as footpaths, roads and pedestrian-only paths from Nov 5 the same year. Other motorised PMDs were similarly banned from April 3 last year.

Failure to abide by the rules can result in a fine of up to $2,000 or a jail sentence of three months. Repeat offenders can be fined up to $5,000 or jailed up to six months.

Starting June 30, PMD-riders would also have to take a mandatory online theory test, which costs $5, before they can be allowed to ride their devices. A pass would award them with a digital certificate that is valid for life.