No need to distinguish between linked and unlinked Covid-19 cases when disease is treated as endemic: Experts

SINGAPORE - It makes less sense to differentiate between linked and unlinked Covid-19 cases as Singapore moves to treating the disease as endemic, public health and infectious disease experts said.

They added that shifting the focus from this means resources can be better used elsewhere.

This comes after the Ministry of Health (MOH) announced that it would stop publicising the number of cases with no known connections.

But if Singapore accepts that the coronavirus is "well and truly endemic" - just like diseases such as dengue or tuberculosis - this number becomes less relevant.

He pointed out that the country does not distinguish between linked and unlinked cases for other endemic diseases, although it does track clusters - especially among vulnerable groups.

"When we stop linking cases, perhaps we accept that the virus is everywhere and we can loosen up some restrictions," Prof Tambyah said.

Since the start of the pandemic, the number of unlinked Covid-19 cases has been a metric to watch. Among other things, it suggested "hidden reservoirs" of virus in the community, which could seed new infection clusters.

But on Wednesday, MOH said it would no longer publish this figure in its daily update, as it is "no longer as relevant as before, given our current strategy of living with Covid-19".

Vaccinated people are more likely to have mild or asymptomatic infections which may slip under the radar, since individuals do not know they are sick.

As such cases go unreported, scientists will not be able to find the missing links between cases.

Elaborating, Professor Dale Fisher, a senior consultant in the National University Hospital's infectious diseases division, said: "There can be several generations of asymptomatic spread and then that chain is identified on the other side of the island. So unlinked cases are more expected and we would not need to increase community restrictions."

In MOH's update on Tuesday, it said the number of unlinked cases in the community had increased to 677 in the past week, up from 184 in the week before.

Without the need to connect the dots, the time and effort poured into linking cases can be better spent elsewhere.

At present, Singapore's complex, resource-intensive contact tracing process - which can take between minutes and days for a single case - helps it identify which cases are linked to one another. Unlinked cases are typically reclassified as new connections emerge.

But whether or not cases are linked is likely to have little impact on how they are managed when detected, said Associate Professor Jeremy Lim, who is also from the Saw Swee Hock School of Public Health.

"This is a lot of work and if it has marginal impact on actual practice, then the limited resources might be better deployed elsewhere," he said.

Read Also
Not the end of pandemic woes: Expert says Singapore could be seeing 1,000 cases a day in 2 to 3 weeks' time 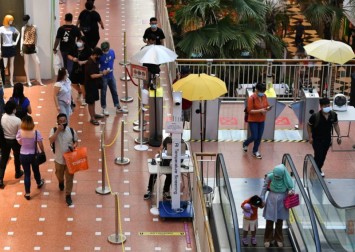 This is especially the case as Singapore's Covid-19 numbers rise. "The burden on the contact tracing teams increases, and they may need more time to establish the case linkages between new cases and previously known cases," Prof Teo said.

He emphasised that contact tracing to identify people who have been exposed to the virus and isolate them as soon as possible is important and still continues.

Instead of the number of unlinked cases, the experts suggested that Singaporeans should pay attention to data such the number of people requiring hospitalisation, supplementary oxygen or intensive care.

These provide an indicator of the overall Covid-19 situation in Singapore and the country's healthcare capacity. Higher numbers mean the system is closer to being overwhelmed, and could result in more deaths.

"We expect this to rise but not by a lot. We now have a raft of treatments for the severely ill and hospital beds should be reserved for this," Prof Fisher added.

Prof Tambyah observed that it is also important to monitor trends in disease incidence and disease clusters - as is done for dengue or influenza - while Prof Lim noted that paying attention to the overall case count is also useful.

As patients tend to deteriorate in their second week or later, knowing this week's numbers - along with the number of patients who are elderly or unvaccinated - can give a sense of future demand, he said.