'No one was willing to help': Woman who helped collapsed man told off by passers-by for being nosy

A motionless body laid sprawled across the bus stop, but no one paid any heed to him. It wasn't until Lily Ng came across the unconscious man was help finally administered.

But when she turned to ask a passer-by to call for an ambulance, the other told her "don't be [a] busybody".

"Very sad no one [was] willing to help," Ng wrote in a viral Facebook post on Sunday (Feb 28), which has since been deleted.

Would you stop to ask if somebody needed help? What if you were a lady, at night, during the COVID-19 pandemic? Netizen...

Posted by The Royal Singapore on Saturday, February 27, 2021

The man, dressed in a food delivery uniform, was found unconscious at the bus stop near Ng's place. Two men stood nearby but neither bothered to check on him, while others simply walked past, Ng recounted.

She immediately went over to check if the man was still alive, and after confirming that he was just unconscious, she approached the other passers-by for help. However, seeing that no one was willing to lend a hand, Ng dialled for an ambulance herself.

While paramedics soon arrived to attend to the man, Ng couldn't help but feel extremely disappointed by the inaction of the other passers-by. 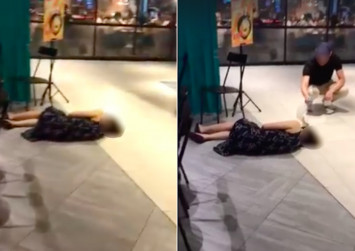 "[I] just hope that everyone understands, don't have to panic during this pandemic period, you can always just help to call ambulance without going near [sic]," she vented. "Every second count and you never know just one call can save a person life [sic]."

She hoped that those who read her post would be more compassionate to one another, especially during the pandemic.

Netizens reassured her that she was definitely not being a busybody and thanked her for her kindness, saying they too would have done the same had they been in her shoes.

Others criticised the two passers-by, calling it "sad and embarrassing" that they could "just ignore a person who has fainted and even go as far as to stop someone else from calling for ambulance".