There's just something about sports that gets people all heated up.

But this latest kerfuffle at a local stadium was not over football. Instead, the unlikely source of conflict was a jogging stroller.

A video capturing the commotion was posted on the r/singapore subreddit on Jan 12 by u/JustSylveon101, who claimed that a friend had filmed the scene at Hougang Stadium.

The video showed an elderly man having a heated conversation with a woman, who was pushing a jogging stroller along the stadium's running track.

As the bewildered tot in the stroller looked on, the pair began to raise their voices.

"You're not letting me use it because you're afraid other people will complain? Then you should go tell the other people," she continued. "This is a public place! I have the right to use the track."

After exchanging a few more words, the woman continued jogging and pushing her stroller as the man strode off.

While the reason for the confrontation was not clear, that did not stop netizens from jumping in to analyse the situation.

Most took the woman's side, labelling the man as a typical "boomer".

On the other hand, some felt that the man could have had a good reason for trying to stop the woman from using the track. 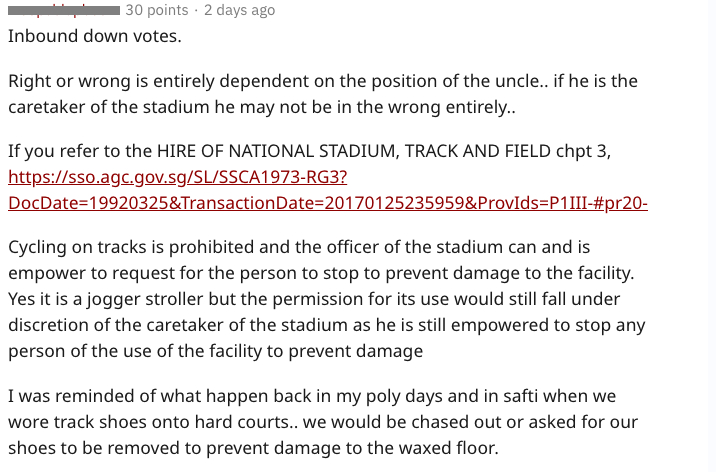 Well, turns out that it was much ado about nothing — at least, according to Sport Singapore, which operates the stadium.

A Sport Singapore spokesperson told AsiaOne that they had investigated the incident and found that it was a misunderstanding after speaking to those present.

The man, who was not an employee, had approached the woman "out of goodwill" to warn her that a football training session was going on as he was worried about the ball hitting the child.

However, the woman had not reacted well to the unsolicited advice.

The spokesperson also clarified that there was no prohibition of strollers at the stadium or on the track and stressed that visitors should "use the facilities at their own discretion".

#Sports and recreation #Social media #In Case You Missed It