People doing visitor registration at TTSH on Thursday morning, before the hospital announced it will no longer accept visitors to protect its patients and staff.

SINGAPORE - Tan Tock Seng Hospital (TTSH) will not allow visitors into its wards until further notice, following the discovery of a possible Covid-19 cluster at the hospital where a nurse, doctor and three patients tested positive for the virus.

"These are necessary measures to contain the situation and protect our patients and staff," said the hospital in a Facebook post on Thursday (April 29) afternoon.

"Our sincere apologies for the inconvenience and we thank you for your understanding."

The 46-year-old Filipino nurse was confirmed to be a community case on Wednesday, while the four others had been found positive in preliminary tests.

The nurse was deployed to Ward 9D, a general ward which had since been locked down following the infections. All patients had been swabbed and isolated.

But the hospital remained crowded when The Straits Times visited on Thursday morning, with many arriving for consultations and medical appointments, people in the emergency department and heavy footfall in the food court. 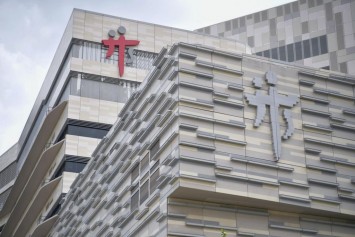 Many people said they were still there for regular appointments at the hospital's clinics.

One of them, who wanted to be known only as Mr Tan, 62, was accompanying his father for a medical appointment on Thursday morning when he saw the news of the Covid-19 infections at the hospital.

He had not cancelled the appointment because he believes that TTSH would have kept the infections under control, he said.

Noting that both he and his father have been vaccinated, he said that this gave them both peace of mind.

As we safely and progressively reopen our hospital for admissions, here’s what you need to know when visiting TTSH: •...

The hospital had already tightened measures for visiting on Wednesday night, saying in an earlier post then that it would allow only two pre-registered visitors throughout a patient's stay.

Freelance producer Dorothy Goh, 30, who was at the hospital with her family members, was waiting to receive updates on her grandmother, who was in critical condition.

Calling the situation "very unfortunate", she added that she believed the hospital would be able to keep the infections under control and not have it spread beyond the affected wards.

TTSH had said on Wednesday that it will be swabbing all staff in the main hospital's ward block.

ST understands that one of the patients found to have tested positive for the virus is a 72-year-old woman who had been warded at the hospital since April 20.

She had been admitted to Ward 9D - a C-class ward - for rheumatoid arthritis and developed a cough and fever on Sunday.

She was told by a doctor around noon on Wednesday that she had to go for a Covid-19 test because she had been having a fever for several days. The results came back positive at about 5pm.