No word on when Malaysia's chicken export ban will be lifted

According to the Singapore Food Agency, 34 per cent of Singapore's chicken supply comes from Malaysia.

SINGAPORE - The Malaysian authorities have not given any indication to Singapore as to when they will lift the chicken export ban.

Asked by Mr Alex Yam (Marsiling-Yew Tee GRC) if the Singapore Food Agency (SFA) has received any indication from the Malaysian authorities as to when they might review or end the ban, Minister for Sustainability and the Environment Grace Fu said: "The answer is no."

Speaking in Parliament on Monday (July 4) about Singapore's food security issues, Ms Fu said that while the Government has adopted a multi-pronged approach to mitigate the risks of unavailability of supply, Singapore cannot fully prevent disruptions such as geopolitical tensions, extreme weather events, or policy decisions by foreign governments.

She said: "We will not be able to eliminate all risks. To so do would be costly and uneconomical. We will also not be able to isolate Singapore from the price fluctuations of food supply."

She added that in recent months, even countries with sizeable food production capacities have faced higher food prices because of higher costs of feedstock, fertilisers and transportation. 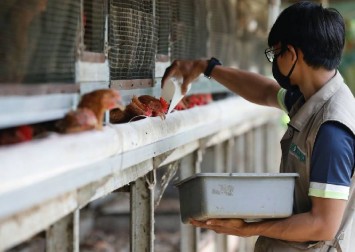 Asked if the Ministry of Sustainability and the Environment has considered exploring the use of offshore islands such as Pulau Ubin for poultry or agricultural uses, Ms Fu acknowledged that such suggestions have commonly been heard during discussions on Singapore's food resilience plan.

She said: "I think our priority must be to meet a significant proportion of our food supply needs. Build up significant skill sets so that we have the production knowledge and capability onshore to support us in times of need."

She explained that the challenge for the country will be to increase food production with less than 1 per cent of land set aside for agri-food production.

"In many cases, we're looking at productivity to the multiple of 10 times of what we're doing now in order to give us the bulk that we need."

Addressing questions on Singapore's efforts to expand the number of approved countries for poultry imports, Ms Fu said: "Even as we diversify our food sources, food safety remains paramount. Only accredited sources that meet Singapore's food safety and animal health standards will be allowed to export to Singapore. This has not hindered our diversification efforts. Specifically for chicken, 25 countries are accredited."

According to SFA, 34 per cent of Singapore's chicken supply comes from Malaysia. Most of those chickens are imported live and slaughtered here. Singapore also receives chilled and frozen chicken from countries including Thailand, Australia and Brazil.

Ms Fu pointed out that importers here choose to import from Malaysia due to proximity and a long history of doing business together.

She said: "There will always be cost-competitive reasons for importers to gravitate to the source market that is most competitive. Sometimes it's because it's the nearest, sometimes it's because there is an established logistical chain that can allow the goods to arrive in the shortest time. Because of competition, they will be reluctant to try new areas that may increase the costs."

Asked by Ms Jessica Tan (East Coast GRC) what Singaporeans can do to support the country's food resilience strategy, Ms Fu said being adaptable and flexible when it comes to food choices is important.

She said: "Be adaptable. If you can't buy something this week, just don't eat this form of meat. If you can't find chicken, go for other forms of meat. If we show some hardiness, then I think the whole of Singapore will have much better resilience against food disruptions."