Non-profit started by former Singapore student to give 10,000 ofo and oBike bikes to needy kids in Myanmar

SINGAPORE - Instead of heading to the scrapyard, 10,000 bicycles from failed bike-sharing companies ofo and oBike will get a new lease of life as gifts for needy students in Myanmar.

A Myanmar non-profit, Lesswalk, bought the bikes in April and will start giving them to the students from end-June. The bikes were bought from third-parties like warehouse operators who were left holding the unused bikes after ofo and oBike folded in Singapore and Malaysia.

The estimated cost of buying, shipping and refurbishing the two-wheelers totalled between US$350,000 (S$478,920) and US$400,000. Half of the cost is expected to be paid by sponsors and the rest, by Lesswalk.

More than 3,000 bikes have been shipped to Myanmar, and the rest is expected to reach Myanmar by end-June. All bikes are slated to be given out by end-2019. 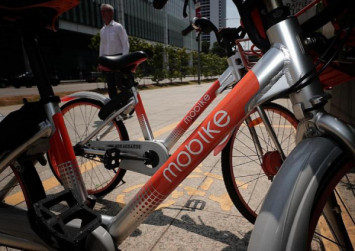 Lesswalk founder Mike Than Tun Win, 33, who had spent almost 18 years in Singapore as a student and is now back home living in Yangon, told The Straits Times in a phone interview on Tuesday (June 4) that he had the idea about a year ago, and started to act on it in March.

"Some kids in Myanmar walk up to one hour to school, and most of them don't have school buses or even know what school buses are," he said.

"This movement is not about buying a new bicycle, which is actually a very straightforward process. It solves a waste problem and gets new bikes for needy children at a cheaper price."

Shared bike firms such as ofo and oBike took off in the initial years of their operations, with their bikes flooding streets worldwide in an intense competition for market share. But the bubble has burst for various operators, with investor funds drying up and many failing to find a sustainable model for their business.

Following their collapse, many of the bikes were wheeled to scrapyards as operators and its vendors sought to recover funds.

Mr Than Tun Win said: "For the scrapyards, they can get maybe about $10 a bike, it is not a lot to them. But these bikes can mean a lot to the students, who can be more productive, save 80 per cent of their time travelling and feel a sense of warmth that people care."

Mr Than Tun Win is aiming to distribute the bikes to rural villages, and has identified students living 2km away from school and aged between 13 to 16 as the main beneficiaries of the 10,000 bikes.

All will be repainted to promote the Lesswalk movement. They will be installed with an extra smaller seat for students to ferry their siblings. Their existing locks will be replaced with a manual lock and key.

The two-wheelers were bought with the help of Singapore bike-sharing firm Anywheel, which acted as the middleman.

Founded by Myanmar national Htay Aung, it bought 4,000 ofo bikes from an unnamed party that won a public auction held by warehouse operator Bok Seng Logistics in April. Meanwhile, the 6,000 from oBike were bought from a warehouse operator in Malaysia.

Mr Htay Aung told ST the transaction prices could not be disclosed owing to business reasons.

"Helping to bring the discarded bikes to people who needed it more was something we had wanted to do. We are glad that Lesswalk has taken the lead in starting this initiative, and that is why we are helping it on a non-profit basis," he added.

Lesswalk's Mr Than Tun Win, who runs a technology company named BOD Tech Ventures, hopes his work will inspire a coordinated movement worldwide and change attitudes towards the disposing of shared bikes.

He is also looking to expand Lesswalk's work by bringing in 100,000 bikes to distribute to poor people in his own country as well as Laos and Cambodia.

Mr Than Tun Win said: "10,000 is just the tip of the iceberg. Globally, there are millions of these bikes, and I just have to connect them to the right people."