Not suing siblings didn't mean 'carte blanche' for anyone else to defame me: PM Lee

In his testimony, PM Lee stressed that he and his wife Ho Ching held no animosity against his brother Lee Hsien Yang and sister Lee Wei Ling.

SINGAPORE - Not suing his siblings over statements they made regarding their 38 Oxley Road family home did not mean "carte blanche" for anyone else to use what they had said to defame him, said Prime Minister Lee Hsien Loong.

He was speaking from the witness stand in court on Monday (Nov 30), on day one of a week-long hearing for his defamation suit against Mr Terry Xu, editor of The Online Citizen (TOC) website.

In his testimony, PM Lee also said the public family feud over the fate of the Oxley property is one-sided, and stressed that he and his wife Ho Ching held no animosity against his brother Lee Hsien Yang and sister Lee Wei Ling.

The defamation suit involves a TOC article published in August last year, titled "PM Lee's wife, Ho Ching weirdly shares article on cutting ties with family members". The piece references a Facebook post made by Dr Lee, in which she claimed PM Lee had misled their late father and founding prime minister Lee Kuan Yew into thinking 38 Oxley Road had been gazetted by the Government.

In his cross-examination of PM Lee, Mr Xu's lawyer Lim Tean said that since the prime minister had chosen not to sue his siblings over their allegations, it was "understandable" that the TOC editor thought he could refer to what they had said.

"(It) is not that anyone can say anything," said PM Lee. "I had decided to take a different approach with my siblings but it didn't mean carte blanche for anyone else to use that and further defame me.

"I'm not obliged to sue everyone in order to sue one person. I consulted counsel and decided who to sue." 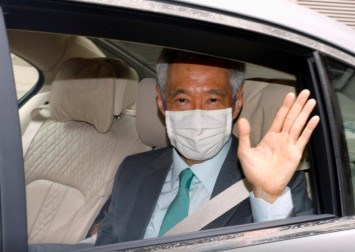 Mr Lim then asked: "Are you suggesting to Singapore and Singaporeans that the media can never report on what your siblings have accused you of, when it's a matter of intense public interest?"

PM Lee said they could, subject to defamation laws. Mr Lim asked if this meant reporting on his side of the story only.

"Not at all," PM Lee responded. "They can report and if I sue, they can defend and vindicate themselves and demolish me - which is what you're hoping to do in this trial."

He pointed out that Mr Xu had repeated allegations he had previously rebutted, in an article read by over 100,000 people, and that those who have not followed the case and its details would believe what was written.

"Your siblings have been making charges against you since 2017… so you are content to let your siblings butcher your reputation?" asked Mr Lim.

PM Lee said he had dealt with their accusations in two ministerial statements, opened himself to questioning in Parliament and invited his siblings to put to him any suspicions. But they have not raised anything, nor sued him, he pointed out.

In his ministerial statement to Parliament in 2017 on 38 Oxley Road, PM Lee had said that suing his brother and sister in court would "further besmirch our parents' names", drag out the process for years, and cause more distraction and distress to Singaporeans.

"As far as the public is concerned, not suing my siblings doesn't mean I condone (the allegations) or that it's true," said PM Lee.

"But if others repeat it and I don't act against others for which my inhibitions against suing siblings do not apply, that would further spread the poison and aggravate the damage."

Family feud: "This too shall pass"

Mr Lim also asked PM Lee if there was a sour relationship between his wife and siblings.

"The animosity is evident on one side from my siblings," said the prime minister. "Neither I nor my wife want this to continue or to hold anything against them.

The feud, he stressed, was on his siblings part.

"I don't understand what it's about," said PM Lee. "I have detached myself from the cause of the feud. I no longer own 38 Oxley, I have sold it to Lee Hsien Yang, and recused myself from the Government's handling of the matter. So there's nothing I can do or not do to influence the matter. I have never done any Facebook post or criticised them publicly other than what I put out in my ministerial statements.

"And I hope against hope that one day, matters may be repaired. But it's one of those things that happen in life, and this too shall pass."

Mr Lim then pressed PM Lee on why he did not invite his siblings for a Chinese New Year reunion dinner after their father's death, to which the prime minister's lawyer, Senior Counsel Davinder Singh, objected.

Mr Lim said he was testing PM Lee's credibility. Justice Audrey Lim disallowed the question, saying that while Mr Lim was entitled to do so, his questioning had to be relevant.

In October last year, Mr Xu also applied to bring PM Lee's siblings into the suit as third parties, with the intention of having them bear damages if he was found to have defamed PM Lee.

He said the TOC article merely quoted directly from public comments made by Dr Lee and Mr Lee Hsien Yang, and that they would know if the allegations were true.

Mr Lim is also defending blogger Leong Sze Hian in another defamation suit brought by PM Lee, to be heard on Monday as well.