SINGAPORE - A Nanyang Technological University (NTU) student who claimed he was stressed out by his studies started taking upskirt videos of several women at MRT stations and at the university.

For nine months, third-year student Chong Yen Bin took videos of women by positioning the camera of his smartphone below their shorts or skirts to capture glimpses of their bare buttocks - which he said he was "addicted" to seeing.

He was finally stopped in September last year when a vigilant member of the public saw Chong following closely behind a woman near the Toa Payoh Bus Interchange.

On Wednesday (Dec 18), the 24-year-old was sentenced to 18 weeks' jail after pleading guilty to six counts of insulting a woman's modesty, with another 20 similar charges taken into consideration for sentencing.

The court heard that Mr Yusman Yusoff had spotted Chong following closely behind the woman, and holding his mobile phone in a suspicious manner on Sept 19 last year at around 6.40pm.

When the 42-year-old lost sight of Chong and the woman, he alerted the TransCom officers on duty in the area.

At about 7.15pm, they spotted Chong at Toa Payoh MRT station and detained him.

Chong's phone was then found to contain several videos of unknown women's underwear or glimpses of their bare buttocks, and he was arrested.

Investigations later revealed that Chong had been heading towards a taxi stand at Toa Payoh Central to leave for the university campus after conducting a tuition class when he spotted the victim near the taxi stand. 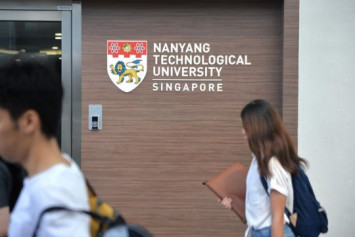 He felt she was wearing shorts that revealed glimpses of her buttocks, and began following her and placing his phone below her shorts to capture a video recording.

Chong admitted that he had started taking such videos since the beginning of 2018, because he felt stressed over his studies and was "addicted" to seeing the buttocks of women.

An NTU spokesman said that Chong is still a student at the university, but did not provide more details due to confidentiality.  He added that NTU takes a serious view of students engaging in criminal conduct.

"Students who are found guilty of such conduct by the courts will be subject to disciplinary proceedings which may lead to the student being expelled or suspended from the University," he said.