NTUC FairPrice stops strawberry imports from Australia; AVA in touch with authorities there

SINGAPORE - Supermarket chain NTUC FairPrice has stopped all strawberry imports from Australia on Monday (Sept 24), in the light of more than 100 alleged incidents in Australia where consumers found needles in the fruit.

Another supermarket chain here, Sheng Siong, has requested its suppliers here to use metal detectors to check each punnet of strawberries.

Meanwhile, the Agri-Food and Veterinary Authority (AVA) said it is in contact with the Australian authorities on the issue, and monitoring the situation closely.

An AVA spokesman said: "The Australian authorities have implemented interim export control measures. Since Sept 19, exporters are required to provide assurance that their exports are free from metal contaminants in order for export permits to be approved."

Examples of measures to ensure this are metal detection and X-ray screening, she added.

Read Also
Market stops selling strawberries after claims of metal found in a pack; AVA looking into the matter 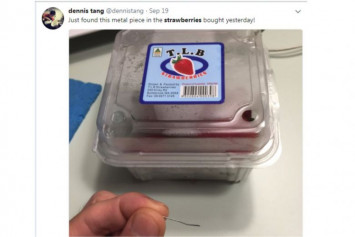 FairPrice said its move to halt the imports is a precautionary measure as the authorities here have not issued any recall for strawberries from Australia.

"Australian strawberries from previous batches of imports remain available on our shelves but will not be replenished when they are sold out," said a FairPrice spokesman.

"We (will) continue to monitor the situation closely, and our food safety protocols and procedures are also in place should we need to recall any products, in compliance with the authorities' advisories."

The spokesman added that strawberry sales have slowed by about 10 per cent since reports of the sabotaged strawberries surfaced. However, she added that FairPrice also sources its strawberries from other countries such as South Korea, New Zealand and the United States.

On Saturday, The Straits Times reported that a local market, Mahota, had removed all strawberries from its shelves after a metal piece was allegedly found inside a pack of the fruits reportedly bought from the store.

ST has also contacted other supermarket chains here for comments.

The AVA advises consumers to cut strawberries into small pieces before consumption, as a precautionary measure.

ALSO READ: This chef has a clever way to deal with Australia's strawberry crisis