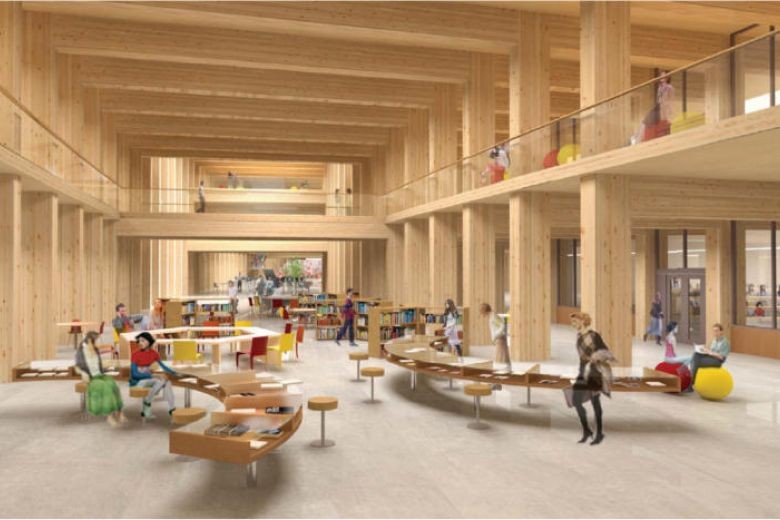 SINGAPORE - Nanyang Technological University (NTU) has unveiled an ambitious five-year plan that will see Asia's largest wooden building being constructed on its campus.

Announcing what he called "moonshot" projects to propel NTU's next growth phrase - which includes a drive to hire hundreds of staff - the university's president Professor Subra Suresh said on Monday (Aug 27) that the proposed six-storey wooden building will be the new home for Nanyang Business School.

Prof Suresh told more than 2,000 staff at a university townhall meeting on Monday: "NTU's new academic building will be our most ambitious sustainable construction project to date.

"Ninety-five per cent of our buildings are already certified Green Mark Platinum, and we are seeking to be the greenest university campus in the world."

The material for this building will be taken from renewable forests and prefabricated for installation on-site, which makes it less polluting and less labour-intensive than traditional construction methods.

In line with this environmentally-friendly push, NTU will also stop issuing plastic bags free of charge from Oct 1. Proceeds from the sale of any plastic bags at retail and food outlets will be channelled to NTU's assistance fund for students.

Prof Suresh also outlined a project to double the solar energy harnessed to power NTU to 9.9 mega-watts by 2019. This will supply between 7 and 10 per cent of the university's electricity needs.

NTU will also invest in new schemes to attract talent in hundreds of positions, in order to fuel its growth as a leading global research university, Prof Suresh said.

From this year, NTU will support 350 new two-year post-doctoral positions for researchers. It also plans to recruit about 300 faculty members and create up to 100 new named professorships. The target is to increase named professorships available at NTU ten-fold over the next five years,

"No deserving Singaporean student will be denied a world-class education at NTU because of financial or other impediments," Prof Suresh said.