A report has been lodged and investigations are ongoing.

SINGAPORE - Chat groups similar to the now-defunct SG Nasi Lemak, which circulated obscene photos and video clips of women in Singapore, have resurfaced on messaging app Telegram. Some of the images show young women in the nude and are pornographic in nature.

Pictures of female commuters on the MRT, selfies of women and TikTok video clips of girls in secondary school or junior college uniforms, with the usernames of the victims revealed, are also being shared in the groups and channels.

Checks by The Straits Times on more than 10 such groups found that most had about 2,000 members. Some had more than 7,000 subscribers, with over 500 photographs and video clips shared.

Police confirmed that a report has been lodged and investigations are ongoing.

Ms Nisha Rai, 21, a National University of Singapore (NUS) political science undergraduate, stumbled across a tweet about such groups on Twitter and reported them to the police on March 24.

Students for a Safer NUS, a group that advocates for a safer environment on campus, posted a statement on social media on Monday to notify students about the resurgence of the groups on Telegram.

Ms Rai is a member of the NUS group, but acting on her own, along with 20 others, helped to uncover almost 60 such groups and reached out to victims to provide them with emotional support. They have contacted about 30 victims so far. 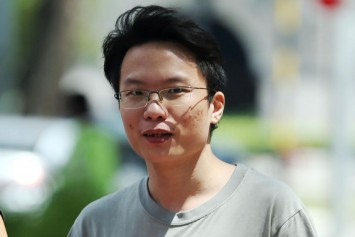 She said: "It's so disgusting. The pictures sent are of adults and minors. It was very hurtful to see such content circulating, and the worst part was the victims were not aware or were afraid to reach out."

She has started a petition to shut the groups down. Over 1,500 people have signed the petition as at Tuesday.

Ms Naazneen Ashfur, 21, who works at a cyber-security company, is also helping to identify the groups, working on this until 3am on some nights.

She added: "I naively believed SG Nasi Lemak going down would scare people into not doing such an activity again but I was so wrong."

In October 2019, four men were arrested for their involvement in SG Nasi Lemak, a group created in November 2018 which had about 44,000 members when it was active. It had 29 administrators.

One of them, Liong Tianwei, 39, was jailed for nine weeks and fined $26,000 on March 9. Another man, Justin Lee Han Shi, 20, and a teenager, 18, were given a year's probation and must each perform 40 hours of community service. Their parents were bonded for $5,000 to ensure their good behaviour. The case against Leonard Teo Min Xuan, 27, is before the courts.

Ms Kelly Leow, communications manager of gender equality advocacy group Aware said its Sexual Assault Care Centre (Sacc), has seen an increase in technology-enabled sexual violence cases. The number of such cases jumped from 88 in 2017 to 118 the next year and 140 in 2019.

She said: "Sacc has witnessed the harassment, intimidation, stalking and threats that often accompany the obtaining and sharing of intimate images. We have also witnessed the shame, confusion and depression, including suicidal ideation, on the part of victims."

She added: "The sending of a nude (picture) to one person is never an implicit permission to share that photo with anyone else.

"We need to put comprehensive sexuality education - to teach about consent, about gendered power dynamics and about the complexities of pornography - into schools. In the short term, we need to redouble efforts to hold online platforms accountable for enabling and, in some cases, profiting off non-consensual images."

Lawyer Gloria James noted that it is hard to control groups on social media, as shutting down one did not stop another from being formed.

Another lawyer, Ms Elaine Low, encouraged victims to take screen shots of the messages as evidence and report to the police as soon as possible.