SINGAPORE - The National University of Singapore (NUS) has stepped up campus security, with provost Ho Teck Hua telling students in an e-mail on Friday (May 3) that it has increased the number of guards at hostels, will be adding hundreds of CCTV cameras and will better secure toilets and shower cubicles.

In his e-mail which was seen by The Straits Times, Professor Ho said: "All these measures will act as a stronger deterrent against potential offenders and improve overall security on campus."

The e-mail comes a week after a campus town hall with staff and undergraduates, where the university's management said it will take immediate steps to better support victims of sexual misconduct and help students feel safer.

This follows criticism over the way NUS handled such cases, after undergraduate Monica Baey, 23, took to social media to express her frustration after she was filmed showering in Eusoff Hall by fellow student Nicholas Lim, also 23.

Prof Ho, who is also NUS senior deputy president, revealed in his e-mail that more than 860 shower cubicles in hostels and sports facilities will be upgraded in phases from now till early October.

For instance, the bottom of shower stall doors will be covered up. By the end of June, restrooms in hostels will also have electronic locks.

The university has also introduced roving security patrols, and at least 300 extra CCTV cameras will be installed by the end of June, he added.

Prof Ho also said that details are being finalised for the new Victim Care Unit that is set to begin operation with the new academic year in August. It will give victims a one-stop place to report incidents and get help.

A new course on respect and consent will also be delivered to all students, faculty and staff from August.

He added that NUS president Tan Eng Chye and himself held the first of a series of sessions on Friday to engage students on their concerns about sexual misconduct.

Read Also
It's not about getting revenge or getting him expelled... I just don't feel safe: Monica Baey 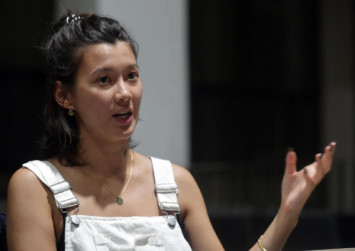 The consultation process, which will include representatives from various halls, residential colleges and student groups, will carry on through the middle of next month.

Prof Ho said: "Our long-term goal is to foster an enduring culture of respect and support, one that makes our campus a place where you feel safe."

At the town hall last week, the NUS management acknowledged that it had failed Ms Baey, who believes that Mr Lim was let off too lightly.

The NUS disciplinary board suspended him for a semester, banned him from entering all hostels, made him write an apology letter and undergo mandatory counselling.