SINGAPORE - A female student at the National University of Singapore (NUS) was allegedly filmed by another student in a bathroom at one of the residence halls on Saturday morning (May 11).

A police report has been made about the incident at Raffles Hall and the suspect has been apprehended by the police for further investigations, said an NUS spokesman.

Police said they received a call for assistance around 8.10am, and subsequently arrested a 26-year-old NUS male student, a resident of the same residential hall, for criminal trespass.

The man is also being investigated for insulting the modesty of a woman, added the police.

The NUS spokesman said "the university is working closely with the police in their investigations, and will take the necessary disciplinary actions". The university is also providing the victim with "dedicated support and assistance".

The spokesman said that since April, the university has been enhancing security on its campuses through improved closed-circuit television (CCTV) coverage, upgrading of shower cubicles and toilet locks to make them more secure, and increased patrols by campus security officers.

"All these measures are in the midst of being implemented by Raffles Hall, including the secure shower cubicles which will be installed in the coming weeks," said the director of campus security in a safety advisory e-mail to students and staff on Saturday afternoon, as seen by The Straits Times. 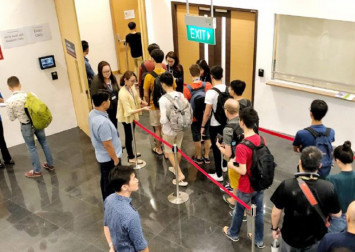 In April, NUS undergraduate Monica Baey took to social media to express frustration that NUS had not done more against a fellow student who had filmed her in her hall shower in November last year. Her posts, which went viral, prompted NUS to form a review committee to take a closer look at disciplinary and support frameworks.

The NUS spokesman said on Saturday that footage of the male suspect involved in the latest incident was captured via a newly installed CCTV camera, which ST understands was installed on Friday.

"The university is committed to accelerating the implementation of these security enhancements, but in the meantime, we would like to urge all students to remain vigilant, and to report any suspicious activity to NUS campus security immediately," said the spokesman.

The university is also developing a course to educate its community on respect and consent, added the spokesman.

Ms Baey said she was filmed by fellow student Nicholas Lim at the Eusoff Hall student residence. Mr Lim was given a 12-month conditional warning from police and was suspended from school for a semester. He was also made to write an apology letter to her.

NUS had said it would be working with students to tighten security in the bathrooms of all students' halls of residences.

The university also said that it would introduce educational seminars on respect, consent and awareness for all students, faculty and staff when the new academic year starts.

In a statement on April 28, the police said there were 25 cases of sexual offences brought before the NUS Board of Discipline during the academic years from 2015/16 to 2017/18.