The graduate club said earlier that the segregation was in line with an advisory issued by Sport Singapore.

SINGAPORE - The National University of Singapore Society (NUSS) said it will stop segregating toilets and changing rooms at its sports facilities on the basis of the users' vaccination status.

Its statement came after photos of a sign that said only vaccinated individuals were allowed to use a toilet at one of the clubhouses were widely shared on social media in the past week.

Many netizens opposed the move and said it was discriminatory.

In a message to its members on Friday (Aug 13), the graduate club said the segregation had been in line with an advisory issued by Sport Singapore (SportSG) on Aug 7, but it retracted the arrangement after the statutory board advised against it.

"The conditions specified by Sport Singapore required the toilets and changing rooms to be separately demarcated for vaccinated and unvaccinated persons," said NUSS.

The society has sports facilities at its three clubhouses at Kent Ridge, Suntec City mall and Mandalay Road in the Novena area. 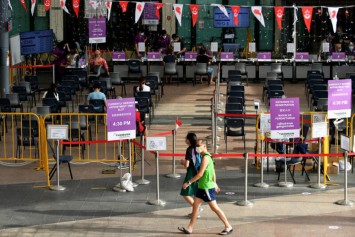 The portion of the SportSG advisory that NUSS said it was complying with stated: "Enterprises will have to ensure that vaccinated individuals who participate in (indoor unmasked) activities do not mix with other users for the entire time they are within the facility (including in common areas such as changing rooms and toilets)."

NUSS said it was later advised by SportSG to allow vaccinated and unvaccinated people to use the same toilets and changing rooms at its sports facilities, provided they adhered to the safe management rules set out in the advisory.

In response to queries, a SportSG spokesman said the measures do not require facility owners to restrict common toilet facilities to vaccinated patrons.

The spokesman said SportSG reached out to NUSS to explain that the principle behind the cited portion of the advisory was to prohibit the mingling and congregating of users in the facility.